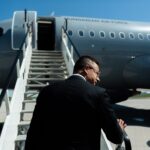 The EU on Monday failed to make headway on finalising a sixth package of sanctions against Russia in response to its invasion of Ukraine, which includes a complete embargo on oil imports from the country.

The first five rounds of EU sanctions included asset freezes and travel bans on Russian President Vladimir Putin, senior Kremlin officials, oligarchs and more than 350 MPs. Other embargoes have included banks and media outlets. What has been achieved in less than three months is “relative light speed for the 27-nation bloc”, AP commented.

The group of most reluctant member states towards the blanket ban on Russian oil comprises four countries in Central and Eastern Europe (CEE). On Friday the EU offered Hungary and Slovakia an extra two years to comply. Czechia, which is also landlocked, received the chance of a six-month earlier deadline, of June 2024. Bulgaria has also asked the EU for a derogation.

“Some member states face more difficulties because they are more dependent, because they are landlocked (and) only have oil through pipelines, and coming from Russia,” EU foreign affairs chief Josep Borrell acknowledged on Monday.

Russia exported 58% and 96% respectively of Hungary’s and Slovakia’s crude oil and oil products in 2021, well over the EU average of 26%.

The most vociferous opponent of the CEE group is Hungary, which has been widely seen as the EU member most closely aligned to the Kremlin in recent years.

Last week Hungarian Foreign Affairs and Trade Minister Peter Szijjarto said “Brussels has no solutions (so) Hungary will therefore maintain its stance that sanctions on Russian oil may only pertain to maritime routes.”

On Monday Szijjarto upped the ante. Szijjarto reiterated that “Hungary has not received any new serious proposal from the European Commission (EC) regarding oil sanctions on Russia”, since EC President Ursula von der Leyen visited Budapest for talks the previous week.

Having said last week that Hungary expects “hundreds of millions of dollars”, by Monday, according to Szijjarto, a blanket ban on Russian oil would require “a total modernisation of Hungary’s energy structure of EUR 15-18 billion”.

Szijjarto dangling the threat of Hungary vetoing the entire package caused mixed reactions across the EU. While Lithuanian Foreign Minister Gabrielius Landsbergis said “the entire union is held hostage by one state”, his opposite number in Ireland, Simon Coveney, said “these are difficult, difficult issues for some countries… let’s not focus on obstacles and negatives today.”

The standoff over an oil embargo raises questions on whether the EU has reached the limits of its unity on sanctions, AP commented. Targeting Russia’s gas sector, on which many more countries are dependent, is likely to prove even tougher, the newswire added.