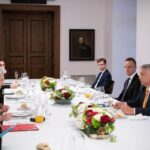 After the meeting, von der Leyen tweeted: “This evening’s discussion with PM Viktor Orban was helpful to clarify issues related to sanctions and energy security.”

Hungary has been the EU’s biggest dissenter regarding the bloc’s latest sanctions package against Russia – its sixth – which includes an embargo on crude oil within six months and refined products by the end of 2022. When the proposal was announced, Orban demanded a five-year exemption, and likened the embargo to dropping a “nuclear bomb” on Hungary’s economy.

Speaking in Parliament before von der Leyen’s flying visit on Monday, Hungarian Foreign Minister Peter Szijjarto said Hungary does not endorse the European Commission’s proposal, which does not propose a solution to the energy security problems it would create.

According to Szijjarto, Hungary’s landlocked status leaves no option but to import Russian oil. However on Friday the EU offered landlocked Hungary and Slovakia an extra two years to comply and a six-month earlier deadline, of June 2024, to Czechia, which is also landlocked. Bulgaria has also asked the EU for a derogation.

Former Russian President Dmitry Medvedev on Friday praised Orban for refusing “to support an energy embargo that would be harmful to his economy and the crazy sanctions against religious figures”.

Passing the sanctions package, the initial deadline for which was 9 May, would require unanimous approval from all 27 EU member states. In what could be interpreted as addressing the current power of veto afforded to Hungary and all EU member states, von der Leyen tweeted prior to boarding her flight to Budapest that “I have always argued that unanimity voting in some key areas no longer makes sense.”

TUI pulls CEE flights due to dip in demand