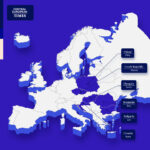 Two countries in Central & Eastern Europe (CEE), Bulgaria and Croatia, are on track to introduce the European common currency. In Sofia, politicians on both the left and right endorse the euro despite the looming government crisis, while Zagreb has even decided on its national symbols to be portrayed on its future euro coins. Other CEE states are not so eager to follow their lead but are divided or indifferent on the issue: the Czech Republic and Hungary form a “Eurosceptic duo,” while Poland and Romania are simply in no hurry.

Theoretically, the adoption of the euro is not a privilege, but an obligation for all EU member states (with the exception of Denmark, which negotiated, and obtained, an opt-out clause at the conception of the Maastricht Treaty in 1992). All others are obliged to retire their old notes and coinage once they fulfill the so-called “convergence criteria.” Among the former communist member states in CEE, six have yet to join the euro club: Bulgaria, Croatia, the Czech Republic, Hungary, Poland and Romania.

Two latecomers – Croatia, which only joined the EU in 2013, and Bulgaria, in 2007 – are now taking the lead and would be ready to accede to the euro-zone as soon as 2023 or 2024, respectively. Since July 2020, both countries (together with Denmark) are in the European Exchange Rate Mechanism (“REM-II”), the exchange rate system that ensures the monetary stability in the EU, which is considered the “waiting room” for accession to the common currency.

But there could be still some hurdles on the way.

Bulgaria: Political will exists to give up the “leva,” but average people skeptical

The new transition government in Sofia has reaffirmed former prime minister Boyko Borisov’s decision that the euro will become the official currency as of 1 January 2024. This so-called “national project” must now be submitted for public debate, and the final decision will have to be approved by the EU institutions. But there is still widespread skepticism among the public, as well as among experts, as to whether the country is actually ready for such a huge changeover.

The main argument against the rapid adoption of the euro in Bulgaria (and a common sentiment in its neighbors) is that the abolition of the national currency will harm not only the Bulgarian economy but the country as a whole. Many fear that being stuck in the eurozone would eliminate any room for economic maneuver. How the Greek economic crisis that began in 2007 was handled did not appear to be an incentive for countries with similar disaster-prone economies to adopt the euro.

To put things in context, Bulgaria has the lowest salaries in the EU and the lowest prices for all basic commodities. Also, the country (together with neighboring Romania) is still subject to the Cooperation and Verification Mechanism (CVM) in the areas of justice and internal market policy.

Croatia has never hidden its intention to join the eurozone as soon as possible, since the country’s EU accession in 2013, emulating in this respect its tiny ex-Yugoslav neighbor (and rival) Slovenia, which joined the EU in 2004 and the eurozone just three years after, in 2007.

There is even an ongoing heated debate about the appearance and symbolism of the country’s future euro coins. Croatia has decided to stamp one of its coins with the visage of the world-famous scientist and inventor Nikola Tesla, triggering official protests in Serbia, where Tesla is also considered a national figure. Tesla was born as an ethnic Serb, in 1856 in Croatia, which was then part of the Austro-Hungarian Monarchy, but lived most of his life in the US.

Serbia’s reaction to the Croatian initiative was initially sour. To top it, Croatian president Zoran Milanović added fuel to the fire by tersely stating that: “Tesla has as many connections with Serbia as Bruce Lee had.” In a return volley, Serbian interior minister Aleksandar Vulin was quoted by the Belgrade newspaper Politika as suggesting to Croats that “rather than using Tesla, they should put the figure of Stepinac on their coins,” referring to cardinal Alojzije Stepinac, archbishop of Zagreb during the Croatian pro-Nazi regime in World War II who, sentenced to prison in 1946, was later beatified by Pope John Paul II in 1998.

In the end, Serbian president Aleksandar Vučić settled the dispute – at least temporarily – by suggesting that if the Croats really want to cast Tesla on their money, they should be free to do so, provided they stamp the figure of the scientist only on high-value coins, and “not on pennies.”

Czech Republic sticks with the koruna

For more than a decade after joining the EU in 2004, successive Czech governments have done everything to keep their country away from the euro. Local economists and politicians have systematically preached against joining the eurozone, and the Czech Central Bank has stuck to depreciating the koruna as a classic way of staving off deflation and recession. This – in spite of the fact that the country does indeed fulfill most of the criteria required in the Maastricht Treaty for adopting the euro.

Part of the explanation is the fact that the Czech attitude towards money, savings and the stability of the national currency is very close to the German one, and Czechs remember how the German population had to abandon their beloved Deutsche Mark for the euro. One final argument which proved convincing, however, was the ease of the conversion: 2 German marks were exchanged for 1 euro, meaning Germans had only to halve all prices in order to get the price of something in euros. (Incidentally, 2 to 1 is also the exchange rate of the Bulgarian leva to the euro, and the Bulgarians too will theoretically only have to cut current prices in half in order to determine them in euros.)

Many tentative dates for Czechia joining the euro have been announced (initially, with 2010 as the year of adoption), but the entire issue has been in limbo ever since.

Opinion polls in the Czech Republic show that a large majority of the population remain opposed to joining the euro. Also, confronted with accusations of conflicts of interest and misuse of EU money, prime minister Andrej Babiš is understandably not very keen to add another subject to the list of grievances shouted at him at every street protest.

Hungary: holding on to the forint as a symbol of sovereignty

Hungary is not in a hurry to join the euro, either. In prime minister Viktor Orbán’s authoritarian rhetoric, the national currency, the forint, is a symbol of sovereignty. It is true that in 2011, when the country’s new Constitution was adopted, the prime minister had announced 2020 as the adoption year of euro, but that date has silently slipped away, forgotten.

As a matter of fact, the 2011 Hungarian Constitution specifies that the national currency is the forint, so that in the event of adopting the common currency, an amendment to the Constitution would still have to be considered.

György Matolcsy, the current governor of the Hungarian National Bank, had assured EU partners in 2019 that Hungary would be ready to join the euro… in “forthcoming decades.” But he also commented, “we need to admit the euro was a mistake,” and even that “the euro is a ‘trap’ and member countries should be allowed to ditch it.”

On the other hand, opposition parties in Hungary repeatedly promise that they will speed up Hungary’s accession to the eurozone, should they defeat Orban’s government. Two-thirds of Hungarians would also endorse the accession, and, semi-officially, the euro already circulates in the country: in restaurants and bigger shops countrywide, euros are accepted as a regular payment.

Poland and Romania: no hurry

Poland has a more balanced attitude towards adopting the euro than Hungary does, but the main sentiment (felt by the government and by a majority of the population) is that it has an inclination to join the euro, as with anything that displays a common European value, but the country is still not technically ready as it stands now.

There is still no target date for Poland’s adoption of the euro, and no fixed term for when the country will join the ERM-II.

In Romania, meanwhile, the adoption of the euro is not seen as an urgent issue, either. There is no hostility towards the European currency, but rather an indifference. The euro circulates in the country, nevertheless, and informal, private payments are often made in euros, while most banks offer the option of opening accounts in the EU currency, but the euro itself has no official status. Restaurants and shops in Romania regularly refuse to accept payments in euro.

The date set for the adoption of the EU currency there is now a vague 2030, but the issue itself is felt as less important than Romania’s accession to the Schengen area, which has become a matter of national pride.

A euro penny for your thoughts

In summary, nothing unites the six eastern EU member states that remain outside the eurozone in their attitude towards the common currency. It is revealing, in this respect, that the issue has always been totally absent from the agenda of all summits, discussions and negotiations of the only regional transnational cooperation structure: the so-called “Visegrad Group” (comprised of the Czech Republic, Hungary, Poland and Slovakia), and it has stayed this way since that group’s creation in 1991, exactly 30 years ago.