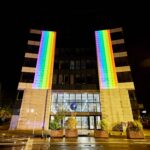 Share this article on:
Diplomacy Hungary News in brief Uncategorized

Uproar in Hungary Over Anti-LGBT Law

Uproar in Hungary Over Anti-LGBT Law

On Tuesday, Hungary’s parliament passed a so-called pedophile law, which critics say is actually directed at the LGBT community and also restricts freedom of expression. Introduced by the ruling Fidesz party which has a two-thirds majority in parliament, the legislation includes a public register of convicted sex offenders and introduces tougher penalties for those prosecuted.

Considering the other stipulations the bill entails, however, many see it as anti LGBT. Critics point out that the law conflates pedophilia with LGBT issues, banning distribution in schools of materials that deal with homosexuality or gender issues, prohibiting teachers from discussing them, and placing limits on media content and advertising dealing with gay or transgender themes.

The law is being condemned by NGOs and human rights groups in Hungary. European Commission president Ursula von der Leyen says the European Union will look into the legality of the bill.

Seen as the latest anti-LGBT move by the ruling Fidesz party, the passing of the bill is also viewed as a successful attempt to split the opposition parties in the Hungarian parliament before next year’s elections. Leftist opposition parties had boycotted the vote, while opposition party Jobbik voted to pass the bill.

Aside from several thousand protesters demonstrating in front of Hungary’s parliament against the legislation, several media businesses have issued statements in support of the LGBT community in Hungary. The country’s largest commercial TV broadcaster, RTL Klub, has been broadcasting a rainbow version of its logo since the passing of the law and pointed out in a statement that everyday movies like Billy Elliot, Bridget Jones’s Diary, and some of the Harry Potter films would be relegated to late-night time slots due to the law.