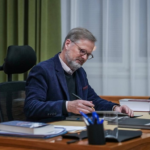 Czechia received near universal acclaim as it completed its stewardship of the presidency of the Council of the EU, which will now be led by Sweden. Leading Czech daily Denik N, wrote that Czechia had “grown up” during its tenure, which ran from July to December 2022.

As the term was reaching an end, European Commission (EC) Vice President Vera Jourova characterised Czechia’s presidency as a “big success” and “down-to-earth”.

Another EC Vice President Frans Timmermans described Czechia’s tenure as “one of the most successful in past decades” noting that it had concluded talks on the EU’s key climate package.

“I have rarely seen a presidency that was more successful, more purposeful, and more professional,” he said.

The situation in Europe was historically challenging when Czechia took over the presidency at the beginning of July, with millions of Ukrainian refugees having spilled over the war-torn country’s border into the EU, along with developing crises regarding energy security and the European economy.

Regarding Russia, Czechia helped the EU to achieve agreement amongst EU member states on the provision of EUR 18bn in financial aid to Ukraine, and further tranches of sanctions against the Kremlin, as well as the introduction of penalties to be imposed on Iran.

Czechia also cleared the path to allow Ukrainian soldiers to train on EU territory, and then became the first country to take part in the military training problem.

“We have maintained a strong, united, and principled position of the EU in the world,” Czech Foreign Minister Jan Lipavsky said.

Czechia also led the adoption of the European Defence Industry Reinforcement through common Procurement Act (EDIPRA), to increase joint military procurement, which totalled only 11% of the armament acquisition of EU member states in 2020.

The EU-27 collectively spend around USD 200bn annually in defence, around a quarter of the expenditure of the US. The EDIPRA will provide EUR 500mn to incentivise joint military spending.

A provisional deal on the “Fit for 55” green energy package was also reached, including new emission allowances for cars and planes, along with the creation of a social fund.

Meanwhile EUR 20bn towards energy diversification has been allocated from the EU’s RePowerEU package, which will reduce dependence on Russian fossil fuels.

The Artificial Intelligence Act, designed to protect citizens from potential risks of AI technology was another piece of legislation that Czechia can count as a significant achievement of its EU presidency.

“I am glad that after granting candidate status to Ukraine, we formally launched accession negotiations with Northern Macedonia and Albania during the Czech Presidency,” Czech Europe Minister Mikulas Bek said.

Czechia “supports further enlargement of the Union and welcomes the efforts of the Eastern Partnership countries, including Ukraine, and the Western Balkan countries to become part of the EU”, Bek added.

The country also played a role in negotiations for Bosnia and Herzegovina to obtain in December official candidate status for EU membership.

On handing over the EU rotating presidency to Sweden on 1 January 2023, Czech Prime Minister Petr Fiala said the term had represented a watershed for Czechia, which “will not be some small, weak and insignificant state someplace on the edge of Europe, whose opinion doesn’t matter, as I typically hear in public debates.

“We should reject and abandon such defeatism collectively. We are the 9th most populous state of the 27 EU member states. Even regards our financial system, prosperity and way of life, we do not belong anywhere near the bottom. We are a serious, medium-sized European nation,” Fiala underlined.