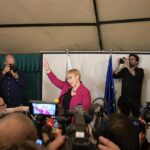 Liberal attorney and author Natasa Pirc Musar, 54, will become Slovenia’s next president after defeating her right-wing rival Andze Logar in the second round of the presidential election on Sunday.

Pirc Musar beat Logar by 54% to 46% in a head-to-head ballot, after the right-winger failed to secure a simple majority in last month’s seven-candidate first-round vote. At 50.6%, turnout was up from Slovenia’s last presidential election in 2017.

“Every woman has one more reason to be happy: another glass ceiling, the country’s highest, has been broken,” Slovenia’s president-elect said as the election results rolled in on Sunday.

Pirc Musar’s election also represents a second victory for the Slovenian left this year, and a further setback for the Slovenian Democratic Party (SDS) led by right-wing populist Janez Jansa, a dominant figure on the Slovenian political scene, who similarly lost a prime ministerial run-off vote to the country’s environmentalist premier Robert Golob in April.

While Pirc Musar and Logar officially stood as independents, they respectively were clearly linked to the Slovenian right- and left- wings.

Logar had served in a number of roles in Jansa governments, most recently as foreign minister, and ultimately lost the weekend ballot due to the solidification of an anti-Jansa bloc. During the campaign, Golob warned that a vote for Logar would put Slovenia back into “dark times”, according to The Guardian.

Pirc Musar campaigned as a potential unifying voice for Slovenia, who has been alarmed at the deterioration of Slovenia’s media landscape under Jansa. “We must strive to that the changes will be acceptable for most – with a clear conviction of unacceptable behaviour,” she wrote.

A liberal lawyer and activist, Pirc Musar has worked for the EU and Europol, and served as Slovenia’s data privacy commissioner from 2004-14. She has studied at universities in Ljubljana, Manchester and Vienna.

Pirc Musar also led the Slovenian Red Cross from 2015-16, has authored or co-authored at least six books on freedom of information and privacy, and worked as a television journalist for over five years. She also represented her Slovenian compatriot Melania Trump in a defamation court case during the Trump presidency.

“Through my work so far as an active citizen, with knowledge, experience and activities in various areas of public life and as a lawyer in the private sector, I have proven both at home and around the world in a wide variety of fields and environments that I understand what the state’s interests are and how to realise them,” Pirc Musar wrote on her campaign website.