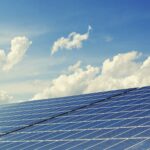 Hungary had the highest proportion of solar technology in its electricity production in the EU last year, according to the Hungarian energy and public utility authority MEKH.

Athough Hungary’s 64% share of carbon-free electricity production was above the EU average, low hydropower and wind power capacities put Hungary at 13%, or 17th in the bloc, for weather-related electricity overall.

While Hungary’s GDP expanded by only 2% from 2019 to 2021, its electricity consumption rose 6%, second only to Denmark.

Other EU member states are way ahead of Hungary on wind and hydropower capacities, meaning that Hungary is near the bottom of the rankings for renewable energy overall.

Several member states upped their coal-fuelled electricity generation, as natural gas prices soared in 2021, but Hungary was not one of them, Portfolio added.

In the EU as a whole, Europe’s renewable electricity continued to grow in the last two years. Some 52% of these renewables have replaced gas since 2019, while one-third supplanted nuclear, and one-sixth have substituted coal.