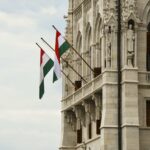 Hungary to go to the polls early April

Hungary to go to the polls early April

While some of Orban’s policies since he won an election landslide in 2010 have been popular, most notably his pro-family and anti-immigration positions, critics say his Fidesz party has meanwhile weakened Hungarian democracy, press freedom and rule of law.

The ideologies of the six parties who in late 2020 formed an anti-Orban alliance range from centre left to centre-right. The opposition’s prime ministerial candidate – elected in an opposition primary in the autumn – is Hodmezovasarhely mayor Peter Marki-Zay, a Catholic, conservative father of seven. On the announcement of the date Marki-Zay vowed to oust Orban’s “corrupt and greedy regime”.