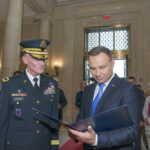 Polish MPs have voted through a bill restricting non-EU ownership of media outlets that would force US conglomerate Discovery to sell off its interests in the country, including liberal news channel TVN24.

The ‘lex TVN’ would strike a further blow against independent news media in Poland, where ruling PiS party has wrested control of state TV news and much of the country’s regional press.

European Commission Vice-President for Values and Transparency Vera Jourova tweeted that the law “puts further pressure on an already troubled media sector in Poland. Once this bill becomes a law, the Commission will not hesitate to take action in case of non-compliance with EU law,” she warned.

Now the law requires the approval of PiS ally President Andrzej Duda, who has said he would not approve it on the grounds that it would damage US-Polish relations.

Demonstrators protested against the new media law in over 100 cities in Poland on Sunday. “They are going to war with free media,” Civic Forum leader and former European Council president Donald Tusk told thousands of protesters gathered in front of the Polish presidential palace.