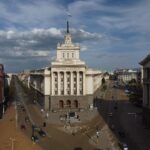 Big coalition expected before Bulgaria’s third election in a year

Big coalition expected before Bulgaria’s third election in a year

Bulgarians will go to the polls for the third time in a year as a result of the country’s severe political crisis. On 14 November, once again, Bulgarian citizens will have to choose a new parliament and a president, too. After already failing twice to be able to form a new government, former prime minister Boyko Borissov’s GERB-SDS coalition appears to be leading the polls at 22.5%, according to the Gallup International Balkan poll. However, after a decade in government, due to corruption allegations the political isolation of Borissov and his party among other parties is growing.

According to projections, pollsters expect that after the third election round the party that finishes after GERB will be able to form a coalition. Namely, the so-called “parties of change” will be in position to form a government. These parties include the “There is such a people”, “Democratic Bulgaria” and “Change continues” parties alongside the Bulgarian Socialist Party (BSP).

Analysts say that their expected “traffic light” coalition will be the first of its kind in Bulgaria since the fall of the Iron Curtain.

Poland u-turns on COP26 pledge to phase out coal