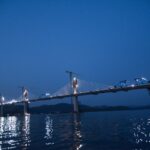 If you’re traveling to Dubrovnik, Croatia’s southern Adriatic resort town, you no longer need to transit through Bosnia and Hercegovina: the two parts of Croatian territory are now united by a spectacular, 2.5 kilometer-long bridge, linking the mainland with the Peljesac peninsula.

For the first time in its history as an independent country, Croatia’s territory is connected. Last week, the last part of a steel span was installed in the Pelješac bridge, which connects a peninsula of the same name with the rest of the country. It is both a historic achievement for Croatia but also for the region. While the bridge was completed ahead of the official deadline, traffic may start to flow only next year, before the summer holiday season.

The Peljesac Bridge is exactly 2,440 meters long, with three spans of 285 meters. At its highest point, the bridge is 55 meters high. The project – an ambition of every Croatian government since independence – was 85% founded by the European Union, the highest possible amount under EU cohesion policy rules. According to Croatia’s government, the total value of the project is EUR 526 billion, including VAT, and the value of eligible costs is EUR 420 million, of which the EU provided EUR 357 million.

When a complicated border situation needs a European solution

At the very beginning, the project was met with a lot of skepticism, particularly from neighboring Bosnia and Herzegovina, but also within the EU. But there has never been any doubt that there was a need to connect these two parts of Croatia (among others in the former Yugoslavia), to avoid cumbersome border controls of people and goods entering and exiting European Union territory. For example, anyone entering the EU from Albania through Montenegro had to enter south of Dubrovnik, while a few kilometers later, that person had to leave EU territory again, and enter Bosnia and Herzegovina. Just about 10 kilometers later, the same traveler had to leave Bosnia and re-enter Croatia. 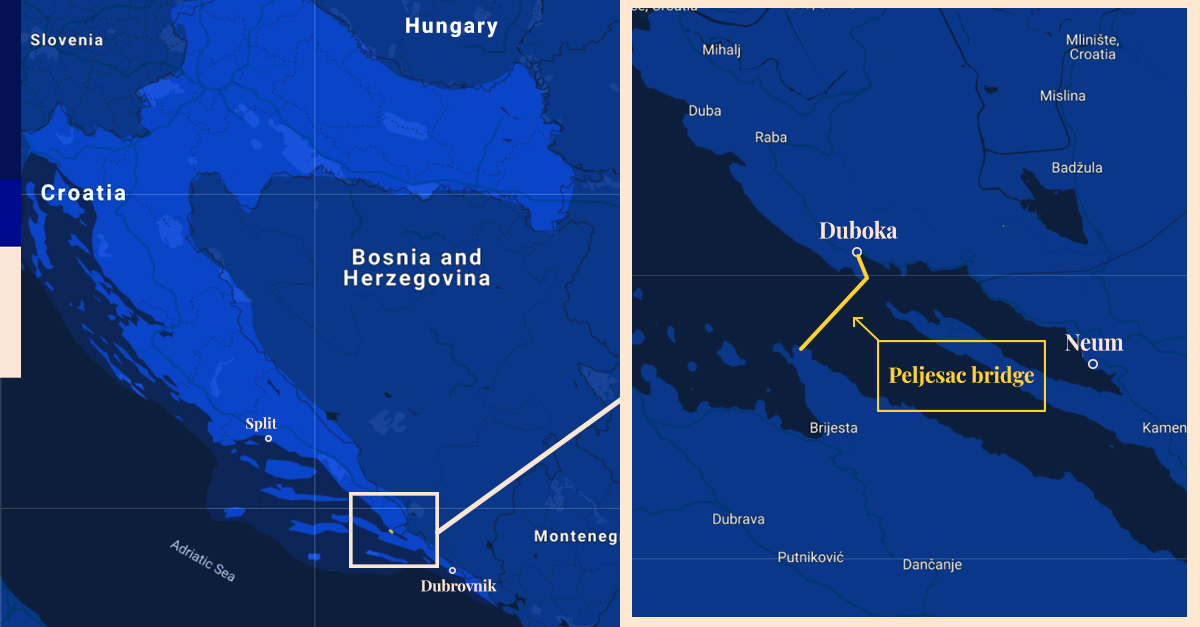 A 10-kilometer transit through a non-EU country made life unnecessarily complicated, and many travelers – especially during the summer – had to spend hours waiting at the border crossings. But this was the only land-based route between Dubrovnik and the rest of Croatia.

The European Commission financed a feasibility study to find out the best way to connect the two parts. Many ideas were considered, from a tunnel to a closed highway through Bosnia and Herzegovina. But finally, the concept for the Pelješac Bridge was chosen. The European Commission argued that the bridge would significantly improve the lives of people in the region, reduce travel time, facilitate the smooth flow of goods and people, particularly during the peak of the tourist season. Furthermore, it would reinforce the territorial cohesion of south Dalmatia with other parts of the country and also provide easier access to some of the southern islands of Croatia, like Korčula.

The bridge will also benefit Montenegro and Albania as well as Greece in the future and will be a part of the Adriatic Ionian corridor connecting northwest with southeast in Europe.

But the project raised some political concerns in Brussels. Croatia’s neighbor, Bosnia and Herzegovina, is considered as a “potential candidate country” to become an EU member. Many questioned the purpose of spending half a billion euros to build a bridge to avoid a country that would one day also be a member state – but Bosnia and Herzegovina’s EU prospects are a long way down the road. The country does not have candidate status, and once it gets it eventually, it will be a long journey towards full membership. So that objection was overridden.

The bridge is 55 meters high to allow passage of all boats that can sail on the waters of Neum Bay. But people living in Neum are also afraid that they will be left in the lurch and lose significant income as a result of the detour of traffic across Pelješac bridge.

The spectacular bridge was designed by Slovenian architect Marjan Pipenbaher and built by the China Road and Bridge Corporation.

There was some controversy when the Croatian government decided to award the contract to a Chinese company, at a time when economic relations between the EU block and China were not the best. This company was awarded the contract in 2018, for a price just under EUR 300 million, not including VAT, and a completion deadline of 36 months. It is the biggest project funded by the EU so far in Croatia, and so far no evidence has been found that the contract violated EU rules and regulations.