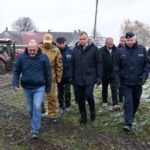 The death of two men at the hands of a missile on farmland in the Polish village of Przewodow sparked fears that the Ukraine war could spill over into neighbouring states this week. The two men were reportedly employed at a grain-drying facility in the village near Poland’s border with Ukraine.

Having retreated from the city of Kherson last week, the latest in a series of military setbacks, Russia is increasingly targeting Ukraine’s power facilities as winter approaches.

On the day of the attack, Ukrainian President Volodymyr Zelenskyy called the development “a very significant escalation” and asked for Ukraine to be more involved in any investigations.

Fears quickly grew that NATO could be about to be dragged into war with Russia. According to Article 5, the core obligation of the NATO Alliance, an “armed attack against one or more (NATO members) shall be considered an attack against them all”.

However after Polish Prime Minister Mateusz Morawiecki and President Andrzej Duda summoned a crisis meeting of their National Security Bureau, Polish military experts said the attack appeared unintentional and the missile had probably been launched by Ukrainian air defence systems.

Duda said “Ukraine’s defence was launching their missiles in various directions, and it is highly probable that one of these missiles unfortunately fell on Polish territory.” The missile was probably a Soviet-era S-300, Duda added.

The head of NATO also said the projectile appeared to be a Ukrainian defence missile, and as such the fatalities were collateral damage from a war that began when Russia invaded Ukraine nearly nine months ago.

Based on Poland’s information, NATO Secretary-General Jens Stoltenberg agreed that the incident had been an accident, at a meeting of the alliance members in Brussels. Stoltenberg was careful to place the ultimate blame at the feet of Russian President Vladimir Putin, however. “This is not Ukraine’s fault. Russia bears ultimate responsibility,” he said.

UN Under-Secretary-General for Political and Peacebuilding Affairs Rosemary Di Carlo meanwhile warned the UN Security Council that as long as fighting continues in Ukraine, “the risks of potentially catastrophic spill over remain all too real”.

For his part, Zelenskyy said he had “no doubt… that it wasn’t our missile”, citing an official Ukrainian military report, adding that Ukrainian officials should take part in the investigation. Ukraine’s military said 77 of the more than 90 missiles fired had been brought down by its air defence systems, along with 11 drones.

If Ukraine’s air-defence system was responsible for the deaths, “then we need to apologize”, Zelenskyy said, adding that “first there needs to be a probe… we want to get the data you have.”

A Russian Defence Ministry spokesman in Moscow said no Russian strike on Tuesday had been within 22 miles of the Ukraine-Poland border, and unexpectedly praised US President Joe Biden’s professionalism, after he said it was “unlikely” that Russia had fired the missile.

Some sceptical regarding Russia’s involvement

Other observers shared Zelenskyy’s scepticism, however, noting that Przewodow is three or four miles from a key electricity power line that connects Ukraine with the EU, close to Dobrotvirska power plant in Ukraine, an important energy hub.

By Friday afternoon, Ukrainian Foreign Minister Dmytro Kuleba confirmed in a tweet that “Ukrainian experts are already working at the site of the tragedy in Przewodow caused by Russian missile terror against Ukraine.

“I am grateful to the Polish side for granting them access. We will continue our cooperation in an open and constructive manner, as closest friends do,” Kuleba added.