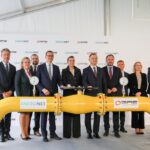 Polish officials symbolically commissioned the Baltic Pipe natural gas pipeline with Norway on Tuesday, a day that turned out to be epochal for energy in Europe.

With an annual capacity of ten billion cubic metres, the pipeline opens a new North Sea channel for Norwegian gas imports via Denmark.

“The era of Russian domination of gas is coming to an end, an era marked by blackmail, threats and coercion,” Polish Prime Minister Mateusz Morawiecki, flanked by Norwegian and Danish government representatives, said at the Baltic Pipe’s inauguration at Budno, west Poland.

Baltic Pipe represents one of the Polish government’s main energy security projects and could replace roughly 60% of Polish gas imports coming from Russia via the Yamal pipeline.

Scheduled to open on 1 October and reach full capacity by the end of November, Baltic Pipe will also give access to other countries in Central and Eastern Europe (CEE), particularly Slovakia and Czechia. Ukraine also hopes to receive gas imports through the pipeline via Slovakia.

However in two incidents that bookmarked the Baltic Pipe being officially commissioned, Russia’s energy conflict with Europe escalated dramatically as the Nord Stream 1 and Nord Stream 2 other pipelines were wrecked in mysterious circumstances.

After detecting huge disturbances underneath the Baltic Sea on Tuesday – one just after midnight GMT and the other at around 5pm GMT – local seismologists ruled out the possibility that earthquakes had caused the damage.

As gas rushed up to the surface of the Baltic Sea, close to the Nord Stream 1 and Nord Stream 2 pipelines, officials from Germany said “critical infrastructure” appeared to have become a target in Europe’s energy war with Russia.

The Guardian noted that the incidents took place just outside the 12-mile territorial waters of Denmark’s Bornholm in the Baltic Sea, and commented that such an evaluation “might be expected from a state actor mindful of the country’s NATO membership”.

One British military source speculated that mines could have been laid from a disguised commercial vessel and detonated later, an operation that would not required particularly specialised military resources, the UK daily added.

Nord Stream 1 was shut indefinitely for repairs at the beginning of September while the original pipeline has never opened.

Morawiecki, who earlier in the day had been inaugurating the Baltic Pipe, said the ruptures probably represent “the next step of escalation of the situation in Ukraine”.

According to the environmental group, “the pipeline will not provide Poland with energy security as the ruling party PiS has not secured enough gas supply contracts.

“This means that the capacity of the gas pipeline will not be fully used, and the contracts for gas supplies signed during war will be very expensive,” it added.

An analysis Greenpeace published last month found that there may be a shortage of gas during the heating season in Poland, as the country could be 830 million cubic metres short of gas in December, which represents more than 40% of monthly domestic demand.

In order to replenish the missing gas volumes, the state-run Polish Oil Mining and Gas Extraction (PGNiG) will have to secure additional contracts, or purchase it on the gas exchange, with prices already at historic heights.

PGNiG last week announced the signing of ten-year supply contract for an average of 200 million cubic metres of gas with the Norwegian company Equinor.

If that contract was concluded at Friday’s gas price of around EUR 180/MWh, the total annual cost for Poland will be over PLN 22 billion (EUR 4.59bn).