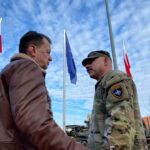 Poland has discussed prices and schedules with company executives, adding to hopes that the South Korean defence firms will further expand into Europe. A senior South Korean government official said it is likely that either memorandums of understanding or memorandums of agreement will be signed in the coming weeks.

KAI has offered to export 48 FA-50 fighter planes to Poland, and reportedly even offered to deliver eight of the 20 FA-50s earmarked for the South Korean air force this year. The size of the contract, which would include parts supplies and after-sales service is expected to top 3 trillion won (EUR 2.24bn). An FA-50 unit costs around 50 billion won (EUR 37.4mn).

Blaszczak confirmed the rumours on Friday afternoon, tweeting: “With this contract, we will significantly increase Poland’s security and the strength of the Polish Army. Fast delivery and industry development are key! We reconciled the often divergent interests of soldiers and the arms industry. It’s a win-win situation for both groups. We’re signing contracts next week!”

This article was amended to include quotes from Mariusz Blaszczak at 2pm Friday, 22 July.