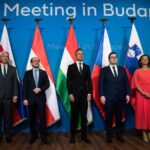 Austrian Foreign Minister Alexander Schallenberg said it is extremely important that the EU provide support to Africa, when he and his opposite numbers from Slovakia, Czechia, Hungary and Slovenia gathered in Budapest on Thursday.

Russian President Vladimir Putin is taking advantage of the famine caused by his war in Ukraine, Schallenberg said, referring to the Sahel region located between the Sahara Desert and the Sudanian savanna.

The five Central and Eastern Europe (CEE) countries’ top diplomats held talks on gas supplies and deliveries, which Slovakia’s Ivan Korcok called useful, adding that his country has adequate gas storage. Korcok praised the progress made on the Euro-Atlantic integration of Moldova and Georgia.

Tanja Fajon of Slovenia said there should be no more internal checks within the Schengen zone, adding that the Slovenian-Croatian border fence is being dismantled.

Peter Szijjarto of Hungary said Hungary’s gas storage facilities are at 44% –  enough to meet 25.5% of Hungary’s annual consumption, and above the European average of 16.7%.

He said Hungary has started talks on buying gas in addition to long-term delivery contracts, and could purchase up to 700 million cubic metres by the autumn. Hungarian business website Portfolio note that this is essentially fulfilling an obligation set by the EU in May.

Szijjarto added that the expansion by two blocks of Hungary’s only nuclear power plant in Paks is being fast-tracked, and will hopefully begin in earnest by next year.

Schallenberg also called for Bosnia-Herzegovina to be given EU candidate status, and underlined the geo-strategic importance of the Western Balkans.