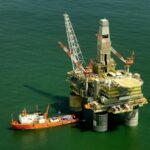 New sanctions on Russia’s oil and gas currently being discussed by EU leaders would impact several Central and Eastern Europe (CEE) countries much harder than their Western neighbours, a French government economic research institute estimates in its latest report.

In CEE, Lithuania, Bulgaria, Slovakia and Czechia could experience national income drops of between 1% and 5%, the French Office of Economic Analysis (CAE) found.

The report, entitled “Economic Consequences of a Stop of Energy Imports from Russia” looked at all of the EU-27 countries except Croatia, and found that “a handful of countries (e.g. Lithuania, Bulgaria, Slovakia, Finland, Czechia) would be very severely affected.”

Rather than imposing a blanket ban, the government institute suggests that a “hefty European‐wide tariff” may be more efficient, to “allow the small but most exposed countries such as Lithuania or Slovakia”, to continue to access Russian gas imports, while ceasing imports to less exposed and larger countries that are more able to pivot away from Russian energy, such as France, Spain, Portugal and Italy. “Germany, while more exposed than France, would face a manageable shock of around 0.3% of national income,” the report found.

The CAE notes that spot prices for natural gas have been extremely high and volatile since December 2021 and even more so since the beginning of the war in Ukraine due to “the speculative anticipation of future price increases”, rather than existing fundamentals.

This increase in price benefits Russia significantly, the CAE writes, concluding that “a very natural first step would therefore be to impose a price cap in prices on the European market to prevent Russia to benefit from such speculation (and) eliminating the upside on future prices.”

As a result, “the spot price may actually decrease even if the EU decides a cap at today’s price (while) a specific Russian tariff on top of the price cap could still be applied,” it adds.

The CAE’s methodology factored in effects along production value chains across 30 sectors and 40 countries.