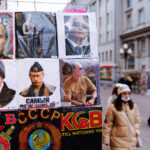 Over two hundred Russian diplomats have been sent home from countries in Europe this week, in response to scenes of atrocities in the Kiev suburb of Bucha, in eastern Ukraine. The number of expelled Russian envoys from European states now totals 325, representing “one of the biggest diplomatic breakdowns of recent years”, according to the estimations of UK daily The Guardian.

In the Central and Eastern Europe (CEE) region, Lithuania’s Foreign Minister Gabrielius Landsbergis announced that his country would expel Russia’s ambassador to Vilnius, and Lithuania’s ambassador to Russia will be recalled. Estonia said 14 Russian consular staff would be expelled from the country, while Slovenia said it was sending 33 Russian diplomats home.

Latvia and Estonia both ordered that two Russian consulates in their countries be closed, effective 1 May, Radio Free Europe reported. Poland, Bulgaria, Slovakia and Czechia have also expelled Russian diplomats from their countries.

On Thursday Austria revoked the diplomatic status of three Russian Embassy staffers in Vienna and another at the Russian Consulate General in Salzburg. Austria’s Foreign Ministry said their activities were not “in accordance with their diplomatic status”.

Hungary has been the exception in the region, having refrained from expelling any Russian representatives, and even criticising Ukraine. Moreover, this week Hungarian Foreign Minister Peter Szijjarto summoned Ukraine’s ambassador in Budapest, citing “offensive comments” about Hungary, adding that it was “time for Ukrainian leaders to stop their insults”.

Although Kremlin officials have called the expulsions a “blow to bilateral relations”, Russia has only retaliated by sending home diplomatic representatives in the Baltic States – Estonia, Latvia and Lithuania – although more expulsions of Western diplomats from Russia are likely.

Kremlin spokesman Dmitry Peskov said the mass expulsions were “short-sighted” as they restricted “the possibilities for diplomatic communication and diplomatic work under such unprecedentedly difficult and crisis-ridden conditions”, Interfax wrote.

Source: RFE, The Local, The Guardian