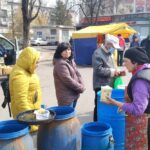 Estonia is providing the most aid to Ukraine by far in relation to its economic output, according to a new data tracker set up by the Kiel Institute for the World Economy.

The Baltic country has promised aid worth nearly 0.8% of its GDP, way ahead of Poland on less than 0.2% and its neighbour Lithuania, which has promised less than 0.1%, according to the German think-tank’s Ukraine Support Tracker.

Of the other countries in Central and Eastern Europe, Slovakia is globally the fourth most generous towards Ukraine in proportion to national GDP, with Czechia sixth and Croatia in seventh place.

The Kiel Institute for the World Economy created the database to record the pledges to Ukraine of support from 31 western governments, including publicly available military, financial and humanitarian aid.

Poland has been the second biggest supporter to the Ukraine in absolute terms, only behind the US, which has committed to around EUR 7.6bn since the country was invaded on 24 February.

Support from EU countries totals around EUR 2.9bn, according to the database. EU institutions have collectively offered EUR 1.4bn and the European Investment Bank EUR 2bn. The UK, Canada and Japan have pledged a combined EUR 1bn worth of aid.

“It is remarkable that the US alone is giving significantly more than the entire EU, in whose immediate neighbourhood the war is raging,” commented Christoph Trebesch, research director at the Kiel Institute and lead author of the Ukraine Support Tracker.

“Since the outbreak of war, the public debate has focused primarily on measures to most effectively harm Russia’s government, while support to Ukraine has received less attention – partly because of missing data,” Trebesch noted.