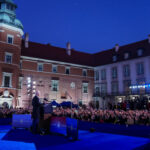 In a speech closing his visit to Poland, US President Joe Biden reassured NATO allies in Central and Eastern Europe that America does have their back in case of an attack by Russia, honouring its “sacred obligation” under Article 5, writes Notes from Poland. Biden warned Moscow: “Don’t even think about moving on one single inch of NATO territory.”

Accompanied by the US Secretary of State Antony Blinken and Defence Secretary Lloyd Austin, the President met with Poland’s leadership and Ukraine’s Foreign Minister Dmytro Kuleba and Defence Minister Oleksii Reznikov on his 2-day visit to Warsaw.

“Ukraine will never be a victory for Russia, for free people [have] refused to live in a world of hopelessness and darkness,” he said.

Harking back to moments in Poland’s history when the country struggled for freedom, Biden made parallels with the situation in Ukraine: “For generations, Warsaw has stood where liberty has been challenged and liberty has prevailed.” Now, said the President, Ukraine and its citizens were on the “front line” in the struggle to achieve democracy and freedom. He noted that the war might not end soon, offering “We need to steel ourselves for the long fight ahead.”

Biden said his message to Ukraine’s people was: “We stand with you, period.”

Slight controversy erupted over one statement made by the President directed at Russia’s Vladimir Putin: “For God’s sake, this man cannot remain in power.” White House officials later clarified that statement, meaning the Russian should lose power within Ukraine and the wider region.

Following the US President’s speech, in a video conference with his Polish colleague Andrzej Duda, Ukraine’s President Volodymyr Zelensky called on Poland to send jet fighters and tanks to assist his country’s efforts against Russian forces. Zelensky argued that Russia’s military is likely to threaten Poland and other NATO countries in the future.