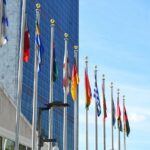 In an emergency General Assembly meeting on Wednesday, the United Nations condemned Russia’s attack on Ukraine and called for complete withdrawal, with 141 out of 193 members supporting the resolution. Those opposed included Belarus, Syria and North Korea. Addressing the press, UN Secretary-General Antonio Guterres said, “The message of the General Assembly is loud and clear: end hostilities in Ukraine — now; silence the guns — now; open the door to dialogue and diplomacy — now.”

With peace talks set to resume between Ukraine and Russia on Thursday morning, overall Russian forces stepped up the intensity of their assault on Ukrainian cities on Wednesday. Ukrainian military officials said that Russian paratroopers had landed in Kharkiv in the early morning hours, attacking one of the city’s military hospitals, while the southern city of Kherson, an important Black Sea port and an industrial centre, allegedly fell to Russian forces; local authorities countered it was still under their control. Authorities in the south-eastern city of Mariupol, said they feared mass casualties from continuous shelling. Ukraine said a total of 2,000 civilians had been killed across the country.

The UN reported that nearly 900,000 people have fled the hostilities in Ukraine since last Thursday’s invasion. Euronews writes that “more than half went to Poland with Hungary and Moldova the second and third choices.”

Those fleeing the war in Ukraine would receive “temporary protection” in the EU, while border checks should be simplified, according to a proposal made by the European Commission on Wednesday, writes Euractiv. Under a directive, Ukrainians could stay in the EU without going through a formal asylum application and could access education, healthcare, and the labour market.

According to Notes from Poland, Warsaw also wants to facilitate Ukrainian refugees’ rights to work and receive child benefits. A number of large employers have also been seeking ways to facilitate the employment of Ukrainians. It writes that over 500,000 people have crossed the border into Poland, half of whom are kids.

Hungary’s Wizz Air today offered up to 100,000 free seats to those fleeing the war in the month of March. Refugees from Ukraine can depart from Poland, Slovakia, Hungary and Romania.

Romania’s Ministry of National Defense said Wednesday that 22 aircraft from three NATO member countries had been deployed in Romania, to “carry out Reinforced Air Police missions under NATO command and at the same time carry out trainings with the Romanian Air Force aircraft, contributing to the development of the reaction and deterrence capacity” writes Romania Journal.

The BBC reported this morning that due to massive outflows of cash, Sberbank, Russia’s largest lender, said it would leave the European market. Despite its lack of liquidity at its subsidiaries, it said it had enough capital to pay back depositors.

On Tuesday night in the US Presidential State of the Union speech, Joe Biden placed sole blame for the hostilities in Ukraine on Russia’s Vladimir Putin whom he said was propped up by oligarchs and corrupt officials whose yachts, planes, etc. Biden said he would seize with the help of European allies. He added that the US would block all Russian flights from operating in US airspace and recognised Ukraine’s ambassador to the US, Oksana Markarova, who received a standing ovation from the US congress. “Putin may circle Kyiv with tanks, but he will never gain the hearts and souls of the Ukrainian people,” the President declared.