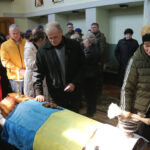 Wednesday saw a flurry of statements from Moscow and Kyiv on the prospects for peace in Ukraine, following talks between the two sides’ delegations on Tuesday in Istanbul, Turkey, but actual progress towards a peace deal remained unclear.

Al Jazeera reported that on Wednesday the Kremlin’s lead negotiator Vladimir Medinsky said Kyiv had shown a willingness in its proposals to meet Russia’s core demands, which include embracing a neutral status, dropping any effort to join NATO, and agreeing not to host foreign powers’ military bases, among others.

Ukrainian negotiator Mykhailo Podolyak also expressed optimism about Tuesday’s negotiations, and said that after Russian forces withdraw, his country would hold a nationwide referendum on a proposal for security guarantees for Ukraine.

However, Kremlin spokesman Dmitry Peskov dampened hopes when he said “we can’t say there has been something promising or any breakthroughs” from Ukraine in the Istanbul negotiations, despite his having noted Kyiv’s proposal submissions as a positive sign. Still, he told press, “There is a lot of work to be done.”

Meanwhile, contrary to Russia’s message Tuesday that it would scale back its military offensive around Kyiv, and in Chernihiv in the north of Ukraine, as an offer to build trust between Moscow and Kyiv, according to an Al Jazeera correspondent, Ukrainian officials said Russian forces might not be retreating, but actually “regrouping”.

Ukraine’s Minister of Foreign Affairs of Ukraine Dmytro Kuleba tweeted: “While negotiations continue, Russia has not ceased hostilities. It is crucial that partners continue to provide Ukraine with more arms and apply more sanctions on Russia. The stronger Ukraine is, the better agreement we can achieve for the sake of Ukraine’s and Europe’s security.”

Ukrainian leaders believe Russia’s actions on the ground, not its words, are the only thing to be believed. While some movement of Russian forces in Chernihiv and areas around Kyiv was observed, the shelling of those places continued. However, the Kremlin’s forces’ appear to be increasingly focused on eastern Ukraine, writes the Guardian.

The paper’s Shaun Walker tweeted: “Ukrainian military spokesman says too early to evaluate Russian de-escalation promises: Some partial movement of units from Kyiv and Chernihiv areas, but no mass scale withdrawal. ‘The enemy has been withdrawing units which suffered the highest losses in order to replenish them.’”

Russian President Vladimir Putin told his French counterpart, Emmanuel Macron, on Wednesday that Ukrainian troops in Mariupol needed to lay down their arms before Russian forces would stop shelling the severely battered city. While France and others have presented Putin with a plan to evacuate Mariupol, according to French officials the Russian President said he’d consider that proposal but reiterated his call for “nationalist militants” to lay down their arms.