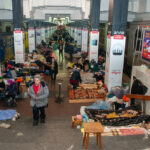 Russia said on Tuesday it would reduce its military operations around Kyiv, and in Chernihiv in the north of Ukraine to build trust towards the prospect of Moscow and Kyiv eventually reaching a peace settlement. The BBC reports that Russia’s Deputy Defence Minister Alexander Fomin made the announcement to “radically reduce” Russia’s military activity in the two cities following face to face negotiations that took place between negotiators from Ukraine and Russia on Tuesday in Istanbul.

According to Al Jazeera, Ukraine offered a pledge of adopting a neutral status, meaning it would not join military alliances or host military bases. The trade-off would be security guarantees for Kyiv, with possible guarantor states including the US, UK, Turkey, France and Germany, who would protect Ukraine from possible aggression, said Mykhailo Podolyak, a political adviser to Ukrainian President Volodymyr Zelensky.

Among their proposals, the two sides would agree 15-year bilateral negotiations on Crimea, which was annexed by Russia in 2014.

Before the talks, the Financial Times had reported that Russia was willing to give up the notion that Ukraine needed to be “denazified”, and might even be open to Ukraine joining the European Union. “Denazification”, “demilitarisation” and legal safeguards for the Russian language in Ukraine were Moscow’s core demands earlier.

Ukraine had reportedly lowered its expectations for the negotiations, and no breakthrough on critical issues was expected. A former US ambassador to Georgia, William Courtney, told Al Jazeera that Russia was not likely interested in an agreement given that Moscow’s position in the war may appear weak, given that Ukraine’s military appeared to be holding its own. Courtney observed, “Some say Russia has begun to lose the war”, so the Kremlin may be waiting for a clear victory on the battlefield to have a stronger hand in peace talks with Ukraine.

Earlier on Tuesday, Ukraine’s Foreign Minister Dmytro Kuleba had advised anyone attending the Ukraine-Russia talks in Istanbul to take safety precautions regarding eating, drinking and touching surfaces after the possible poisoning of Russian billionaire Roman Abramovich and other Ukrainian negotiators who had attended earlier peace talks at the border between Ukraine and Belarus. On Tuesday, Abramovich was reportedly in attendance in Istanbul.

No concrete progress emerged from earlier ministerial-level talks in Turkey, which took place in Antalya on 10 March, and Ukraine and Russia have struggled to see eye-to-eye in their discussions since, which have taken place via video conference.

Before the meeting on Tuesday in Istanbul’s Dolmabahce Palace, Turkish President Recep Tayyip Erdogan met with representatives of both countries. The BBC reported that Erdogan spoke of his “deep sorrow” from the weeks-long war and said Turkey was a good host for discussions given that it was friends with both sides. Erdogan said, “It is in the hands of both sides to stop this tragedy.”

The talks are scheduled to continue in Istanbul on Wednesday.