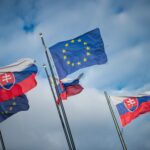 Slovakia’s failure to approve judicial reforms and a “court map” could curtail its access to EU recovery plan funds, writes Euractiv. Out of the four proposals considered by the country’s lawmakers, only one, having to do with district courts’ headquarters, made it to a second reading in the Slovak Parliament.

Aimed at increasing the efficiency and transparency of Slovakia’s judiciary, the so-called court map would reorganise district and city courts, possibly resulting in the closure of some regional courts. While not passing that measure, Slovak MPs did pass a proposal on the headquarters of district courts.

The court map reform is one of the milestones Slovakia must achieve in accordance with the Recovery and Resilience Facility regulation, which includes an assessment of transparency criteria – like institutional resilience, among others – laid out for Bratislava (and other member states) by the European Commission.

With its legislature unable to pass the reforms, the disbursement of Slovakia’s recovery funding is likely to be delayed. Expected to be approved by April, Bratislava hoped to apply for its first EUR 500 million in Recovery and Resilience Plan assistance. Now, according to parliamentary rules, the legislative proposals can only be resubmitted after six months.