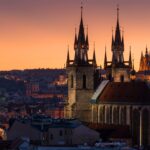 Share this article on:
Czech Republic Economy News in brief

Czech salaries rising by up to one-fifth

Czech salaries rising by up to one-fifth

Private sector wages in Czechia are rising by as much as 20%, Czech Radio found when it interviewed employment industry experts this week. High inflation and rocketing energy prices while the government has chosen to freeze salaries for civil servants, means companies are having to hike salaries to keep employees.

Covid slowed down the influx of people from abroad looking for work and Czechia has one of Europe’s lowest unemployment rates, noted Jaroslava Rezlerova, the CEO of ManpowerGroup, the country’s largest recruitment agency. While a significant number of people have prioritised flexible working hours over salary in recent years, wages have come back to the forefront thanks to rising inflation, she explained.

“In some sectors wages are growing above inflation rates, around 15%, or even 20%. This could have a slow-down effect on the economy, because foreign companies could decide that it is not worth it for them to have branches here,” said Rezlerova, Radio Prague International reported.

Czech Chamber of Industry and Trade vice-president Radek Spicar joined Rezlerova in calling for a restructuring of the country’s economy. Spicar identified the key problem as that a Czech employee on average creates value equivalent to EUR 13 in an hour, while in Germany that figure is EUR 42. “It is not that a Czech employee works 45 minutes less than a German: it is about the structure of the economy,” he said. “We are a sub-contracting-oriented economy, rather than one focused on manufacturing the final product,” Spicar added.

“We are significantly controlled by foreign capital. It is good that foreign economies invest in this country, however their dividend profits end up outside of the Czech Republic. If that money stayed here, it could be invested into research, development or better salaries,” the external service of Czech Radio reported Spicar as saying. To make this happen, companies will need state support to boost the size of the labour market and simplify procedures for establishing R&D facilities in Czechia, Spicar added.