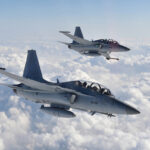 In conjunction with South Korean President Moon Jae-in’s 9-day tour of Europe, Slovakia and South Korea have inked a memorandum of understanding (MOU) that could result in the delivery of Korean-built defense training aircraft to Slovakia. Bratislava is looking to replace its fleet of training aircraft and plans on accepting proposals for that in the first half of 2022.

As part of their MOU, negotiations are facilitated on South Korea’s aircraft manufacturer, Korea Aerospace Industries Ltd. (KAI), delivering 10 FA-50 fighter jets to Slovakia’s state-run defense firm LOTN for USD 500 million. KAI developed the trainer jet, which can also be used for operations, with America’s aerospace firm Lockheed Martin. Other details were not available at this time.

The Slovak-South Korea agreement was signed in Budapest, Hungary by South Korea’s Defense Acquisition Program Administration Minister Kang Eun-ho, who while there will also discuss defense cooperation with Hungary. “I look forward to providing opportunities to expand defense cooperation with Hungary and Slovakia, which have great potential (for South Korean defense exports),” said Mr. Eun-ho, in a statement.

Earlier on Wednesday, president Moon met with his Hungarian counterpart Janos Ader. Both heads of state agreed to forge a strategic relationship in the wake of the record-high level of trade seen between their two countries in 2020: USD 3.6 billion. Both Hungary and South Korea are hoping to step up cooperation in the electric vehicle and battery industries. Among the 90 Korean investors in Hungary are Samsung electronics and Hankook tire.

As part of his trip, on Thursday president Moon will also meet with leaders from the other Visegrad 4 group countries: Czechia, Poland and Slovakia.