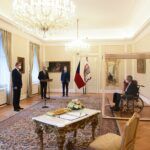 Share this article on:
Czech Republic Diplomacy News in brief

Fiala said his new coalition, expected to form mid-December, hopes to be a government of change. In the short term, the Fiala administration will have to deal with rising coronavirus infections, a ballooning budget deficit and an energy crisis.

President Zeman inaugurated Fiala from inside a sealed cubicle, as he contracted COVID-19 during a recent hospitalisation.

Zaev to step aside as North Macedonia PM