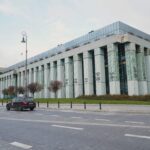 The European Court of Justice (ECJ) on Wednesday ordered Poland to pay EUR 1 million on a daily basis for not suspending national legislation, particularly the jurisdiction of the Supreme Court’s disciplinary chamber, which critics say is being used to punish independent judges.

The row over the rule of law in Poland escalated on 7 October when the Polish Constitutional tribunal issued a verdict that was widely interpreted as rejecting the primacy of EU law. European Commission President Ursula von der Leyen called it a “direct challenge to the unity of the European legal order”.

As Poland has failed to adhere to several ECJ rulings, the EU has withheld a EUR 36 billion COVID recovery fund payment earmarked for the country. Poland’s Prime Minister Mateusz Morawiecki called threats of financial penalties “unacceptable” in the European Parliament on 19 October, and accused the EU of “blackmail” and “overstepping its powers”.

While outgoing German Chancellor Angela Merkel favours the swift disbursement of the recovery funds, several North Western EU member states strongly disagree. According to Dutch Prime Minister Mark Rutte “it is very difficult to see how a big, new fund of money coming out of this recovery discussion last year could be made available for Poland when this is not settled.”

Poland is meanwhile being fined EUR 500,000 per day for refusing to temporarily shut down the Turow coal mine and power plant near its tri-border with Germany and Czechia, and a further EUR 100,00 daily for resuming logging in the Bialowieza Forest. However Green MEP Daniel Freund noted on Wednesday that these penalties, which total EUR 584 million annually, constitute only 3.1% of what Poland receives from the EU budget.

Some 40.8% of Poles say their government should obey the ECJ interim judgement and 32.5% support finding some kind of compromise, a Polish pollster found on Tuesday. Poland’s Supreme Court has currently stopped scheduling new cases at the constitutional tribunal, but is still hearing those timetabled earlier.

EU microchip financing plan lags behind on the global scene