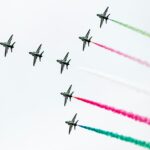 Hungary hosted a major airshow over the weekend, with the participation of dozens of military aircraft from across Europe. The Kecskemét Airshow featured aircraft and helicopters recently purchased by the Hungarian military, like the Airbus H145, Gripens, Falcons, and Zlin training aircraft. British and Italian Eurofighter 2000s were also present, while the Russian-made, recently overhauled Mi-24 combat helicopter performed a joint demonstration with the Gripens.

The airshow’s 120,000 spectators were able to get a closer look at the Brazilian-made Embraer KC390, a military transport aircraft also ordered by Hungary. Embraer has recently announced it will soon establish an office in Hungary, mostly to engage in research and development projects – but has not ruled out setting up a factory in Hungary at a later date.

The event, which was attended by members of the Hungarian government, including Minister of Defense Tibor Benkő, Minister of Finance Mihály Varga, and Commissioner for Defense Development Gáspár Maróth, highlighted the growing importance of the defense industry in Hungary. Recently, leading government officials have tended to refer to the defense industry as a future area for economic development in Hungary.

In 2016, the Hungarian government launched a 10-year-long, comprehensive defense strategy called the Zrínyi 2026 Military Development Program, to modernize the country’s long neglected defense sector. The program has a budget of EUR 10 billion and its objective is to reach a 2% military expenditures per capita target by 2024. Within the framework of the program, the Hungarian government has acquired 20 medium-sized multi-mission H145M military helicopters and 16 long-range, tactical transport H225M military helicopters from Airbus. Airbus Helicopter is also building a competence center in the Hungarian city of Gyula, where helicopter parts will be produced starting in 2022.​