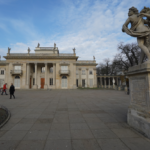 Poland: From Dependence to Falling Trade

Poland: From Dependence to Falling Trade

Historically, Warsaw has maintained the strongest stance against Russia’s efforts to gain political and economic influence, although it’s Poland’s 12th most important trading partner. Regardless of the government composition in Warsaw, Poland is resolute in its antipathy towards Moscow and views it as a threat.

Poland was highly dependent on the Soviet Union in both political and economic terms after World War II. However, this changed after the political transformation of 1989/90. This is not surprising, as maintaining distance from Russia is a defining element of Poland’s past and present. Today, the leading investors in Poland are Germany (EUR 37.26 billion) and France (EUR 17.58 billion), while Russia has a rather limited presence. Poland is Russia’s 12th most important trading partner, but the volume of imports and exports seems to fall every year, including Polish exports of machinery and agricultural products, due to the sanctions imposed on Russia for the annexation of Crimea.

In terms of energy issues, Warsaw has repeatedly said it will not buy any Russian gas after 2022, when the two sides’ long-term supply deal will end. Instead, it will take pipeline deliveries from Norway and buy sea-borne cargoes of liquefied natural gas, including those from the United States. Poland’s gas transit deal, which dates back to the 1990s, is tied to the Yamal pipeline, which carries Russian gas from the northern Yamal peninsula to Poland and on to Germany. It has an annual capacity of 33 billion cubic meters (bcm). Poland’s gas demand is about 17 bcm a year, with more than half of that provided by Russia under the long-term contract with Gazprom. For future supplies, Poland is expanding an LNG terminal in Swinoujscie on its Baltic coast. Poland is staunchly opposed to the expansion of the Nord Stream 2 gas pipeline system that directly links Russia and Germany.

With Russia, considered to be a direct threat to Poland and the Baltics, especially after 2014, traditionally Poland has invested  – even more heavily in recent years – in its relationship with the United States on all aspects involving security and defense. Of course, this is not surprising, as Poland is the most pro-US country among the EU member states. This is reflected in Warsaw’s security policy choices in a wider sense, its agenda on NATO, bilateral military relationship with the US as well as in major defense procurement decisions, including the purchase of Patriot missile defense system, F35 Joint Strike Fighters, or initiating the establishment of a permanent US military base in Poland.

“If someone is undertaking aggressive military activities in Ukraine and Syria, if someone is bolstering his military presence near his neighbors … then we have an unequivocal answer regarding who wants to start a new Cold War. Certainly, it is not Poland or the NATO alliance.” (Andrzej Duda, 2016)

Poland, traditionally critical of Moscow (similar to the Baltic states), sees Russian President Vladimir Putin’s geopolitical aspirations as a particularly existential threat to the country. Piotr Buras, director of the European Council on Foreign Relations’ (ECFR) Warsaw office, notes, “Current bilateral relations are operating at a very low level and will be kept there by Russian policy on Ukraine as well as Russian-West relations.”

In 2009, the EU launched its Eastern Partnership, a joint Polish-Swedish initiative intended to support the democratization of the EU’s immediate neighboring countries to the east – the former parts of the Soviet Union – and to promote their European integration. This enduring support is rooted in Poland’s geopolitical strategy to contain Russia by democratizing mutual neighbors, moving them closer to the EU, creating a buffer zone, and weakening Russia’s sphere of influence. Poland’s commitment to the Eastern Partnership has thus survived not only major changes of political power between 2009 and 2015, but also the quick and radical transformation of the Polish political system after 2016.

There are no major differences between the governing party, PiS, and its liberal opposition with regard to their overall position vis-à-vis Russia.  In addition to joining the EU, Poland’s accession to NATO was even more important. This also explains why Poland is, among EU member states, perhaps the most committed to maintaining NATO ties and cooperation, a strategic issue for Warsaw, as is maintaining close ties with the United States. The country’s relationship with the European Union is also influenced by how Brussels deals with Russia.

Hungary and its Alliance Forged in the Past