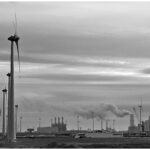 Czech Prime Minister Petr Fiala will travel to the Netherlands this week to open a new terminal, according to an agreement made in June.

“On Thursday, I am going to the Netherlands to ceremoniously open a new LNG terminal, thanks to which the Czech Republic will have an alternative in the event that Russia shuts off the gas,” Fiala tweeted on Monday evening.

Fiala was responding to an announcement from the Netherlands’ ambassador to Czechia Daan Huisinga that the first of two giant FSRU (Floating Storage Regasification Unit), had arrived in Eemshaven.

Eemshaven should cover up to one-third of Czechia’s annual gas consumption From the autumn, Huisinga said.

Czechia booked the regasification capacity at Gasunie’s LNG import hub in Eemshaven in June, in cooperation with CEZ Group. The two FSRUs have a combined annual capacity of around 8 billion cubic metres.

When Gasunie – Dutch natural gas infrastructure and transportation company – started the tendering procedure for LNG from Eemshaven in May, it said more than 15 parties had registered an interest, making demand four times higher than supply.

Slovakia will also receive more LNG following the launch of its new Slovak-Polish interconnector last week, when it also had the launch of a third reactor at the nuclear power plant in Mochovce, south Slovakia. The reactor should be running at full capacity, covering 13% of Slovakia’s electricity consumption, by early next year.

With the pipeline Slovakia will gain access to LNG terminals in the Baltic Sea, meaning it will also have access to Norwegian gas. Poland will also gain access Southern European terminals and Slovak gas storage. The pipeline can also transit a mixture of hydrogen and natural gas.

Part of the Three Seas Initiative’s North-South Gas Corridor, the infrastructure will enable the transit of more Norwegian gas to south-east Europe. The new gas pipeline also connects the LNG terminals in Swinoujscie, north Poland and Krk, west Croatia and enables gas imports more from the US and Qatar.

Hungarian Foreign Minister Peter Szijjarto announced last week that Russian state energy firm Gazprom has agreed to hike to 5.8 million cubic metres of gas its daily delivery volume to Hungary via Serbia and Austria, up from the 4.5 billion figure stipulated in their 15-year gas contract.