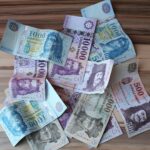 As national currencies shed value across Central and Eastern Europe (CEE) on Thursday, the Hungarian forint fell hardest, to historic lows of 423 to the euro and 437 to the US dollar.

The forint led a slump in eastern European financial markets as worries over the fallout from Russia’s aggression in Ukraine were amplified by concerns regarding a looming global recession.

Just seven months ago, on the day of the Russian invasion of Ukraine on 24 February, 371 forints bought a euro, while 333 forints were buying a dollar.

The cash-strapped country has been negotiating with the EU regarding the release of billions of euros from the COVID:19 Recovery and Resilience Facility (RRF) funds as well as from the seven-year EU budget, over a dispute concerning the application of the rule of law in Hungary.

International markets have become risk-averse to CEE currencies and the forint in particular, due to their proximity to the war in Ukraine as well as soaring energy prices, which have prompted investors to transfer assets to the greenback and US government bonds.

The strengthening of the dollar has been another factor in the weakening of CEE currencies, due to the US Federal Reserve raising its interest rates earlier than the European Central Bank.

In the case of Hungary, its access to EU funding to both the RRF and the seven-year EU budget is also hanging in the balance, with a decision likely in November.

Meanwhile the country is also facing a double budget deficit problem, with a high national debt coupled with a current account that has been driven into negative territory by expensive energy imports and the government’s pre-election salary hikes for civil servants.

CEE currencies have been weakening in recent months. On Thursday, the second most affected regional currency was the Polish zloty, which also fell to an all-time low against the US dollar, crossing for the first time the 5 PLN to USD1 barrier, where it remained on Thursday.

On Thursday the Hungarian Central Bank (MNB) raised its one-week deposit facility from 11.75% to 13%, to match the base rate change on Tuesday.

The MNB announced three new monetary-tightening instruments in August, which should come into effect in the coming days and reduce interbank liquidity.

The fall of the forint indicates that the market has reacted negatively to the suspension of interest-rate hikes, Hungarian business website Portfolio comments.

Hungary forbade government institutions from disbursing non-salary-related payments from the national coffers in a recent decree.

According to local media, Hungarian Prime Minister Viktor Orban feels that the post-election spending cuts he ordered in May are being “sabotaged”.