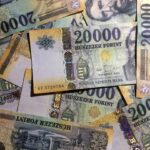 The Czech, Polish and Hungarian currencies all weakened against the major global currencies this week, as recession fears intensified globally, impacting emerging markets. As investor sentiment became more risk averse, investors have turned to the dollar, and the Polish zloty and the Czech crown both weakened against the greenback.

However it is the Hungarian forint that has fallen further than its regional peers, and is currently one of the world’s worst performing currencies. By Wednesday the forint had plummeted to historical lows against three major currencies: to 416 to the euro, 408.6 per dollar and 421 to the Swiss franc.  Bloomberg noted that the forint has lost more of its value against the dollar than any other emerging-market currency over the last six months.

The Hungarian central bank’s verbal interventions, and biggest hike of Hungary’s key interest rate since 2008, had a limited effect in shoring up the fall, and the forint made a modest rebound later in the week.

According to the Hungarian business website Portfolio, Hungary’s vulnerability is linked to the high current-account deficit caused by high energy prices, as well as the government’s protracted dispute with the EU over Recovery and Resilience Facility (RRF) funds. Moreover, regulatory governance and special sectoral taxes have not impressed investors and worsened the business climate, Portfolio added.

“Investors see the Hungarian economic situation as volatile and risky, due to the development of the budget and current account deficits,” Hungarian analyst at K&H Bank David Nemeth said. “Although the MNB sent a clear message to the market with last week’s unusually high interest rate hike, this seems to be insufficient for the time being,” he added.

Investors see Hungary’s widening current account deficit, coupled with a fiscal gap, as risky, and the economic outlook as fragile, Nemeth underlined, adding that that a key issue is whether it can reach agreement with the EU on its RRF funds.

Hungary is the only one of the EU’s 27 member states that has failed to secure RRF funding, and – due to disputes around its anti-corruption laws – has already missed out on 13% of the RRF payment (HUF 326bn), which could only be requested until December 2021. Last month the expected transfer of EUR 7.2bn was recalibrated to EUR 5.8bn due to Hungary’s relatively high GDP growth. If an agreement is not reached by the end of the year, Hungary could miss out on up to 70% of its RRF payments.

This week Hungary resorted to asking for help in unlocking the RRF billions from Czechia, whose six-month EU presidency stint began on 1 July. Balazs Hidveghi, a Hungarian MEP not normally given to conciliatory gestures to the EU, told reporters in Strasbourg on Wednesday that “we ask the Czech presidency to help ensure that all member states, including Hungary and Poland, can access the EU funds they are entitled to as soon as possible.”

Hidveghi repudiated “unnecessary debates”, arguing that “having one of the Visegrad Group countries (Poland, Czechia, Hungary and Slovakia) hold the presidency of the Council of the EU for the next six months gives us hope that the region’s interests will be a bigger factor in EU decision making.” EU members, including Hungary and Poland, need of all the funds available “in the current challenging situation”, Hidveghi said.

According to Hungarian economist Zoltan Torok, the underperformance of the forint against other currencies is down to government debt, which is around 80% of national GDP, much higher than for neighbouring countries: Czechia’s, for example, is 40-50%. Another reason is the energy crisis, which could particularly affect Hungary because of its greater dependence on Russian energy. The best scenario for Hungary would be if the government could reach a deal with the European Commission, Torok underlined.

On Saturday morning the Hungarian government posted on Facebook a video of Prime Minister Viktor Orban claiming that “peace is the only cure for war inflation”, and that it had been responsible for the fall of UK Prime Minister Boris Johnson.

Meanwhile former MNB governor Gyorgy Suranyi was particularly scathing of the Hungarian central bank’s incumbent head, Gyorgy Matolcsy and his team: who have said “neither credit outflows, loose fiscal policy nor real wage increases have had an inflationary impact. So what on earth could have an inflationary effect? They should think about their own credibility,” Suranyi opined.