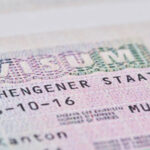 Lithuania, Latvia and Estonia are finalising coordinated agreements on restricting entry for the Russian citizens with Schengen visas, the three Baltic countries’ foreign ministers announced after a meeting of the Nordic-Baltic Eight in Kaunas, Lithuania, on Wednesday.

The Baltic countries are planning tighter measures than those announced by the EU on Tuesday, which will end the EU’s simplified visa application process for Russian citizens in place since 2007.

With the exceptions of visits made for humanitarian and family reasons, freight and diplomacy, the Baltic countries will refuse entry to all Russian citizens, regardless of whether they hold visas to enter the EU’s Schengen open border zone.

Latvian Foreign Minister Edgars Rinkevics said the entry ban should be in place by mid-September. Rinkevics argued that a dramatic increase in Russian citizens entering Latvia with Schengen visas in recent months “is becoming a public security issue”, adding that “this is also an issue of a moral and political nature”.

Also on Wednesday the Lithuanian government resolved to ban access to Russian citizens and also extended the national state of emergency in border regions near Russia and Belarus, as well as airports, railway and border stations, and other points of entry, until 16 December. Lithuanian MPs must now approve the resolution.

Estonian Foreign Minister Urmas Reinsalu underlined that the three Baltic countries are introducing respective national policies, rather than drawing up an international agreement.

On Tuesday the European Commission (EC) announced a proposal to “fully suspend” the EU’s Visa Facilitation Agreement with Russia that was put in place n 2007.

A statement from the EC said “Russian citizens will no longer enjoy privileged access to the EU and face a lengthier, more expensive and more difficult visa application process”.

“The suspension is in response to increased risks and threats to the Union’s security interests and the national security of the Member States as result of Russia’s military aggression against Ukraine,” the EC added.

“A country like Russia, waging a war of aggression, should not qualify for visa facilitations as long as it continues conducting its destructive foreign policy and military aggression towards Ukraine, demonstrating a complete disregard to the international rules-based order,” the EC underlined.

EC President Ursula von der Leyen tweeted on Tuesday that “there can be no business as usual with Russia”, adding that “we propose to fully suspend the EU visa facilitation agreement and not to recognise Russian passports issued in occupied regions. Visa facilitation is a token of trust, which Russia’s war of aggression has completely shattered,” von der Leyen wrote.

According to the new regulations, the EU will allow Russian visa applicants for applicants from certain professions such as journalism and civil society, as well as political dissidents. The EC has also proposed to refuse to recognise Russian passports issued in occupied areas of Ukraine.

Jan Lipavsky, the foreign minister of Czechia, which currently holds the rotating EU presidency, said on 31 August that EU member states which border Russia are free to take measures to restrict Russians ‘in accordance with the Schengen code”.

However Finnish Foreign Minister Pekka Haavisto said the country is waiting for a clarification from the EC on whether it can ban entry for Russians with Schengen visas issued by another country.

“We want to have legal clarification from the Commission,” Haavisto said. “Can you actually cancel the whole Schengen principles? This is at the moment still unclear.”

For its part, the Polish Foreign Ministry has said it “will stick to its commitments”. Meanwhile Bulgaria’s Minister of Tourism Ilin Dimitrov has announced that the country will raise entry visa prices for Russians from EUR 35 to EUR 80.