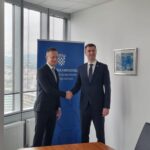 Croatia is ready to enlarge the capacity of the Adria oil pipeline as part of a long-term energy cooperation agreement to transit oil to Hungary and Slovakia, the countries jointly announced.

Adria, also known as the Yugoslav or JANAF, is a crude oil pipeline in Croatia, Serbia and Hungary, which has branch lines to Bosnia and Herzegovina and Slovenia.

Foreign Minister Peter Szijjarto said “if crude oil cannot come from the east, it can only come through the Adria oil pipeline, but that needs to be expanded” after he met Croatian Energy Affairs Minister Davor Filipovic in Zagreb.

According to Szijjarto, Hungary must accept that delivery along the Druzhba oil pipeline from Russia could become impractical. “We have heard that the Ukrainians are threatening to stop transits,” he said, adding that Hungarian energy firm MOL will clarify times, amounts and rates of shipments with Croatian authorities.

On Tuesday European Commission President Ursula von der Leyen welcomed an EU agreement that oil arriving to Hungary via the Druzhba pipeline can be substituted by expanding the Adria pipeline capacity to transit oil arriving from Croatia.

Von der Leyen said 45-60 days and “some investment” may be required to boost the Adria’s capacity, partially to amend Hungarian oil refineries to process a different kind of oil.