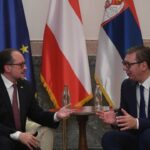 Austria’s foreign and European affairs minister said he expects the countries in the Western Balkans (WB) to join the EU, after he met Serbian government officials in Belgrade on Monday, 13 June.

Alexander Schallenberg added that he hopes Serbia and other WB states will align their stances on Russia with Western policies. “It’s clear that EU perspective is not a one-way street,” Schallenberg underlined.

Serbia was widely criticised for extending an invitation Russian Foreign Minister Sergey Lavrov to Belgrade for a visit last week, only for the plan to be thwarted when neighbouring Bulgaria, North Macedonia and Montenegro closed air space to his plane.

Vucic had been expecting to sign an “extremely favourable” three-year natural gas supply contract with Lavrov. Serbia is almost entirely reliant on Russian gas, and its main energy companies have been under Russian majority ownership since 2008.

Vucic said Serbia appreciates Austria’s commitment to speeding up its European integration and hopes for continued support. “I informed Minister Schallenberg of the challenges that the WB countries face on their European path”, he said, according to N1.

Vucic later tweeted that “the meeting and the open conversation I had with Alexander Schallenberg reinforced our relationship with Austria and the mutual trust we share.

“This is the cornerstone to further strengthen bilateral relations, and contribute to European integration and regional stability,” he added.

Writing on Twitter, Schallenberg said “Austria and Serbia share close relations, with Austria being one of the largest investors. Serbia can fully count on our support for EU accession.” He will now continue south to Kosovo for official talks tomorrow.

Monday’s was the second visit of a senior EU member state official to Serbia in recent days. On Friday German Chancellor Olaf Scholz met Vucic in Belgrade to persuade him to join EU sanctions against Russia.

Vucic was unmoved by Scholz’s suggestion on sanctions, however, and wrote that he “does not respond to pressure in this way” and there will be no change over his country’s stance towards Russia.

Scholz also told Vucic that “two states that don’t recognise each other can’t become EU members”, referring to delays in Serbia’s accession process due to its fractious relationship with Kosovo.

Also on Friday, Serbia agreed with Hungary that it will store 500 million cubic metres of natural gas in the country this winter.

Hungary and Serbia will also increase the capacity of electricity transmission between their respective national grids by 50%, to 1,500MW, with a new line connecting the two countries planned for completion in the spring of 2028.