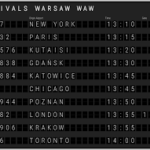 Share this article on:
Aviation News in brief Poland

A strike that would have seen traffic cut by two-thirds at Poland’s two biggest airports has been averted after air traffic controllers accepted a last-minute temporary agreement with national air navigation agency PAZP.

Air traffic controllers, whose wages were cut in response to the Coronavirus pandemic, had threatened to leave their posts en masse. After 44 resignations in February, a further 131 controllers had threatened not to renew contracts that were up for renewal at the end of April.

This total of 175 de facto resignations would have meant some 85% of Poland’s air traffic controllers had left their posts since the start of the year.

PAZP has now demurred to all of the ZZ KRL union’s demands on working conditions, while talks over pay are ongoing and issues related to operations and whistleblower protection are also on the table.

“Passengers can breathe a sigh of relief,” Poland’s Infrastructure Minister Andrzej Adamczyk told local website Gazeta.pl. Thanks to the agreement, “airports will operate full-time”, he said. According to Adamczyk, PAZP has agreed to restore controllers’ wages to pre-pandemic levels.

Andrzej Fenrych, deputy chief of ZZ KRL, which advised union members to sign a fixed-term contract until mid-July or extend their notice period, called the last-minute agreement merely a “truce”. As per the agreement, Polish air traffic controllers will keep working until July 10.