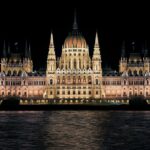 The Polish government’s Stop Russia Now advertising campaign arrived in Hungary on Wednesday, increasing speculation that the alliance between the two countries’ populist nationalist governments has reached breaking point over differences on Russia’s invasion of Ukraine.

Of the Visegrad Four (V4) group, comprising Poland, Czechia, Slovakia and Hungary, only the latter country was chosen for a campaign. Polish ambassador Sebastian Keciek said this had been a Polish government decision.

Keciek explained that the 19-country campaign is designed to raise awareness of Russian war crimes in Ukraine and to deter European politicians from engaging in business with Russia after the war.

The eight-language information drive has been running on social media for several days. “The #StopRussiaNow campaign is the cry of those who have been brutally murdered on the streets of their hometowns,” the organisers wrote.

Meanwhile a railway station in Zakarpattia, a Ukrainian city populated by ethnic Hungarians, was hit by a rocket attack on Tuesday, local website Karpatalja reported. This was the first attack on the city since Russia invaded Ukraine on 24 February.