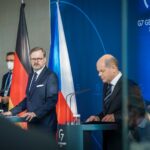 Germany will help Czechia to modernise its army by replacing military equipment it sent to Ukraine, German Chancellor Olaf Scholz said at a press conference with Czech Prime Minister Petr Fiala in Berlin on Thursday evening.

Scholz said Czechia will receive newer Western weapons in place of the Russian-built, pre-1989 technology it has provided to Ukraine, and with which the Ukrainian military has more experience.

Earlier in the day Germany had secured four gas storage and conversion units and identified Wilhelmshaven, a German North Sea port, as a delivery hub.

“The meeting in Berlin today was very successful and delivered concrete results,” Fiala wrote on Facebook after his meeting with Scholz. On the planned modernisation of the Czech army, he said “I’m very glad we found a solution so quickly and we can exploit the potential of both our countries.”

Fiala added that “the second critical topic was energy security and our common intention to get rid of dependence on Russian gas and oil. We talked about the expansion of the (Wilhelmshaven) plant that Germany is using, and we also agreed that we will start talks and create a joint working group that will deal with the use of German LNG terminals.”

The Czech premier – on his inaugural visit to Berlin – also visited the German Council on Foreign Relations DGAP on Thursday, where he discussed his upcoming stint as the rotating president of the EU, which will run through the second half of the year.