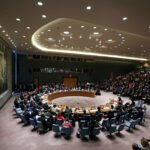 Czechia will participate in the UN Human Rights Council meeting on Thursday 12 May, after being elected as Russia’s replacement in the 47-member body earlier this week.

The special session from 10am will address the deteriorating human rights situation in Ukraine including reported atrocities in Mariupol, at the request of the government in Kyiv. The meeting will be webcast live in six languages.

Russia resigned from the Council last month after it was suspended over its invasion of Ukraine on 24 February. On Tuesday Czechia was voted onto the Council with 157 votes in favour and 23 abstentions, as 180 of the 193 UN member countries cast their ballots. Russia had been in its second year of the standard three-year term, which Czechia will now complete.

Czechia was the only candidate for the seat assigned to an Eastern European county after the UN General Assembly adopted the “West-authored” resolution suspending Russia from the Human Rights Council, Russian state new agency TASS writes.

The assembly approved a US-initiated resolution on April 7 to suspend Russia from the Human Rights Council by a vote of 93-24 with 58 abstentions, AP reported.

Council spokesman Rolando Gomez said that by withdrawing, Russia avoided being deprived of observer status at the rights body, the news agency added.

The Geneva-based institution investigates allegations of breaches of human rights in UN member states and addresses issues such as freedom of association, assembly, expression, belief and religion, as well as sexual, racial and ethnic minorities.

The Council does not make legally binding decisions but as well as authorising investigations can apply political pressure. The body voted on March 4 to initiate an inquiry into alleged Russian violations during Moscow’s invasion of Ukraine.