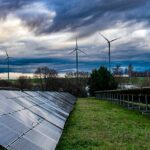 The European Commission (EC) is assessing whether the EU can ramp up its renewable energy target for 2030 from 40% to 45%, Reuters reported on Thursday.

Russia is the EU’s biggest gas supplier, and in the wake of its invasion of Ukraine, the EC is keen to decrease its reliance on fossil fuels and switch to renewables, which provided 22% of its energy in 2020.

The EC will next month publish a plan to completely remove its reliance on Russian fossil fuels within five years, in part by introducing a fast-track procedure for renewable energy permits.

However several EU member states in Central and Eastern Europe including Lithuania, Slovakia, Czechia and Bulgaria may be harder hit than their Western counterparts, due to their deeper reliance on Russian gas.

Markus Pieper, an MEP for the German centre-right CDU/CSU alliance, warned that the EC should prioritise related legislation for before the summer: “otherwise we’ll be starting again from the beginning.”

EU countries and the European Parliament are now negotiating the possible hike to 45% as part of a wider climate-change legislative package.

“We are working on it at full speed,” Mechthild Woersdoerfer, EC energy deputy director-general, said on Wednesday.

National renewable energy mixes vary widely across the EU, ranging from over 50% in Sweden to less than 10% in Luxembourg, Reuters noted.