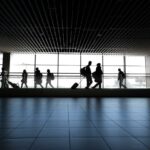 The commercial flight numbers of several Central and Eastern European (CEE) countries are closing in on their pre-pandemic levels faster than the EU average, according to new data reported by Eurostat.

When the EU’s official statistics office compared the number of flights made in March 2022 to those in March 2019 it found that no EU member state had fully recovered its air traffic volume.

Croatia was the best performer in the whole bloc, comparatively speaking, with a fall of just 6% in fight numbers from 3 years earlier, Eurostat reported, quoting data compiled by aviation organisation Eurocontrol.

Amongst other CEE countries, Romania rebounded second fastest, as last month it clawed back all but 16% of its commercial air traffic from March 2019.

Also above the EU average drop of 27% were Hungary and Bulgaria, both of which had 23% fewer commercial flights in March 2022 compared to 3 years earlier, and Poland and Lithuania (-25%).

The countries with the most deflated commercial flight markets were Estonia, whose traffic was down  28% last month compared to March 2019, followed by Slovakia (-33%), Czechia (-42%) and Latvia (-43%), Eurostat found.

Slovenia registered as the worst hit commercial flight market in CEE – and also the EU as a whole – last month, and is the only country in the bloc to not regain at least half of its flight volumes, which were 56% down compared to March 2019.