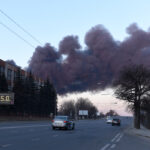 A failure to negotiate peace between Ukraine and Russia could lead to World War 3, Ukrainian President Volodymyr Zelensky told Fareed Zakaria on Sunday morning in their interview on CNN. The President said he was ready to have direct negotiations with his Russian counterpart Vladimir Putin. While offering that Ukraine had shown its ability to strike back, Zelensky said all means should still be pursued to find peace. “If there’s just 1% chance for us to stop this war, I think that we need to take this chance,” he said.

The city of Mariupol continued to be battered by Russian forces. NPR reported that an art school there where 400 women, children and the elderly were seeking shelter from hostilities was bombed on Sunday – and as many as 200 people are still trapped under the rubble, according to a Ukrainian member of parliament.

According to CNN, dozens of Ukrainian troops were killed in a missile strike in the southern city of Mykolaiv where a missile strike hit their living quarters, while an Al Jazeera correspondent reported that Ukraine’s second-largest city Kharkiv has been facing “constant bombing, missile strikes, shelling, [and] heavy artillery.”

Several thousand people were evacuated from besieged cities in Ukraine, according to a senior Ukrainian presidential official, who said that authorities in some locations were unable to evacuate people due to Russian shelling, writes CNN. Mariupol’s city council alleged that Russian troops had forcefully deported several thousand people – mostly women and children – into Russian territory, according to Al Jazeera.

Euronews is reporting that 10 million Ukrainians – about one fourth of Ukraine’s population – have fled their homes since Russia’s invasion of Ukraine began over three weeks ago, according to the UN High Commissioner for Refugees, Filippo Grandi, who provided the information via Twitter. According to the UNHCR, 3,389,044 Ukrainians, mostly women and children, have left the country since 24 February.

On CBS’s Sunday morning news show Face the Nation, US Secretary of Defence Lloyd Austin said Putin’s forces were launching “disgusting” deliberate attacks on civilians because their offensive on Ukraine, he said, is “stalled”.

Meanwhile, China’s Foreign Minister says China “is on the right side of history” in its stance on the hostilities in Ukraine. Wang Yi told reporters on Sunday Beijing would “continue to make independent judgments” and never accept any “external coercion and pressure”. CNN writes that FM Wang’s comments refer to Joe Biden’s discussion with Chinese President Xi Jinping on Friday when the US President attempted to dissuade Beijing from giving Moscow help in its Ukraine offensive, noting that China has not made an outright condemnation of Russia’s invasion.