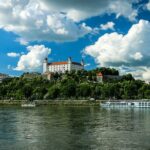 NATO troops have begun arriving at the Sliac military base in Slovakia to deploy US-made “Patriot” anti-missile defence systems in various places to maximise Bratislava’s airspace defences, according to a report by Slovak Spectator.

The Patriots are primarily for beefing up Slovakia’s airspace protection, and will be there temporarily, according to the country’s Defence Minister Jaroslav Nad, who welcomed the arrival of the “first elements” of the missile system on Sunday night in a tweet. Last week, Bratislava had said it would supply Ukraine with Soviet-era S-300 missile defences with the understanding that it would receive Patriots from NATO – as a “replacement”.

Russia’s Foreign Minister Sergey Lavrov said last week that any arms supply to Ukraine would be considered a “legitimate target”.

On Facebook, Nad thanked Germany and the Netherlands for the Patriots and said consultations were taking place “so that the protective umbrella covers the largest possible territory of Slovakia”.

Meanwhile, Slovakia is set to host a total of 2,100 NATO troops, who comprise an enhanced forward presence that Slovakia’s Parliament approved last week.