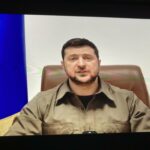 Members of Germany’s Bundestag gave a standing ovation to Ukraine’s President Volodymyr Zelensky following his 10-minute speech on Thursday, writes the BBC. In his address Zelensky reminded MPs that Kyiv had asked Berlin to limit its economic ties with Moscow before the war, but Germany instead helped Russia build a wall “between freedom and bondage” which he encouraged Berlin to tear down.

Meanwhile, Al Jazeera reported that according to the Kremlin negotiations between Kyiv and Moscow were continuing online. Kremlin spokesperson Dmitry Peskov called Russia’s conditions “extremely clear, spelled out and fully brought to the attention of the Ukrainian negotiators,” but said, “we do not see a similar zeal from the Ukrainian side”. According to the Guardian, lawyers were drafting a peace deal between the two sides but that was contingent on a Russian forces stopping their offensive.

But France has alleged that Russia may be “pretending to negotiate”, according to further reporting by Al Jazeera. French Foreign Minister Jean-Yves Le Drian explained to Le Parisien that Russia was using a strategy it had used in other conflict zones: “making maximalist demands, wanting Ukraine to surrender and intensifying siege warfare”.

On Thursday, the UK, the US, France, Albania, Ireland and Norway accused Russia of war crimes in Ukraine, according to the Guardian.

Ukrainian authorities rushed to rescue hundreds of civilians trapped in the basement of Mariupol’s Drama Theater on Thursday after it was bombed a day earlier. It was thought that more than 1,000 people were sheltering there in recent days. MP Dmytro Gurin told the BBC that the bomb shelter was intact. He said “We don’t know yet whether we have wounded people, or killed people. But it looks like most of them have survived and are ok.” As of Thursday evening 130 had been rescued, wrote the Guardian.

In a separate item, the BBC reports that 90% of buildings in Mariupol have been destroyed by Russian forces’ daily bombardment of the it, according to authorities in the besieged eastern city.

According to the Guardian, more than 20 people were killed and 25 injured on Thursday when a Russian airstrike destroyed a school and community centre in Merefa, not far from Kharkiv.

The New York Times wrote that US officials  are estimating that about 7,000 Russian soldiers have fallen in the 3-week invasion of Ukraine. However, Kyiv claims 13,500 Russians have died, while Moscow says its casualties number only around 500.