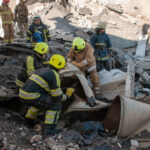 The US Defence Department says there is “clear evidence” that Russian forces are committing war crimes in Ukraine, according to reporting by the Guardian. In a news conference on Monday, the Pentagon alleged Russia’s military is attacking indiscriminately and that the Defence Department would contribute to an investigative process of such acts.

Those statements came in the wake of US President Joe Biden’s comments last week that he thought Russia’s President Vladimir Putin was a “war criminal”, “murderous dictator” and a “pure thug”.

Al Jazeera reported that Russia had summoned the US Ambassador to Russia, John Sullivan, to inform him that ties between Moscow and Washington were close to being severed due to Biden’s remarks. A Russian Foreign Ministry statement said, “Such statements by the American president, which are not worthy of a high-ranking statesman, have put Russian-American relations on the verge of rupture.”

Reuters later wrote that the US State Department confirmed that in Sullivan’s meeting with the Russian government the Ambassador demanded that Moscow follow international law and allow consular access to all US citizens detained in Russia, like American Brittney Griner, a professional basketball player who’s been held there since February.

Ukraine rejected Moscow’s demand that the Black Sea port city of Mariupol surrender before 5am Monday, writes the Guardian. Russia had said the 300,000 people believed to be trapped there would be allowed safe passage out of the port if the city surrendered. The BBC reported that Mariupol’s mayor said Moscow’s humanitarian promises could not be trusted.

Meanwhile, no progress was made in talks between Russia and Ukraine, according to Al Jazeera, who cited the “neutral status” of Ukraine being something that Kyiv was open to, guaranteeing that the country would never join NATO.

In a video address on Monday, Ukraine’s President Volodymyr Zelensky suggested Europe cut all trade with Russia. He said, “Please do not sponsor the weapons of war of this country, of Russia. No euros for the occupiers. Close all of your ports to them. Don’t export them your goods. Deny energy resources. Push for Russia to leave Ukraine.” While Zelensky addressed Germany directly, the Guardian reports that Berlin has opposed an outright halt on Russian energy imports.

Al Jazeera reported Monday that European Union foreign ministers disagreed Monday on whether and how to slap sanctions on Russian sources of energy over its invasion of Ukraine, with Germany saying the bloc was too dependent on Russian oil to introduce an embargo. EU foreign policy chief Josep Borrell said that concrete decisions on the issue would be made at a later stage.

At least eight people were killed by shelling that destroyed a shopping centre in Kyiv on Monday, writes the BBC, while Al Jazeera reported that Russian troops fired upon and wounded several protesters in Kherson, which has been under Moscow’s control since early March. And Russia launched cruise missiles at a Ukrainian military facility in the western Rivn region, according to the country’s Defence Ministry.

A NATO official said on Monday that Russia’s ally Belarus could soon attack Ukraine and possibly allow Moscow to place nuclear weapons on its territory, although up to now there has been no evidence that Belarusian troops had directly participated in attacking Ukraine.