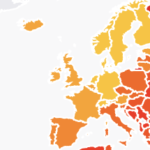 Share this article on:
Austria Estonia News in brief Uncategorized

Estonia and Austria have the cleanest economies in Central and Eastern Europe (CEE) according to the latest annual report by the anti-corruption NGO Transparency International (TI). Austria and Estonia ranked joint 13th worldwide, of the 180 countries surveyed, after scoring 74 out of 100 on TI’s 2021 Corruption Perceptions Index (CPI), which was released on Tuesday .

Of the other CEE countries, the two other Baltic states performed relatively well, as Lithuania tied with Spain to make 34th place, just above Latvia, which was joint 36th with Israel. Slovenia was 41st for transparency in a global scale, just above Poland in 42nd place. Hungary slipped to 73rd and Bulgaria to 78th in this year’s rankings.

TI says corruption appears to be at an impasse, as 86% of countries across the globe are not making much progress on increasing transparency. The NGO also identified a correlation between civil liberties violations and corruption.

The most widely-used global corruption ranking in the world, the CPI is calculated based on the opinions of entrepreneurs, economists, and corruption surveys and data. Tied at the top of the rankings were Denmark, Finland and New Zealand, all of whom scored 88 points on the TI index.

Slovakia most resilient on consumption