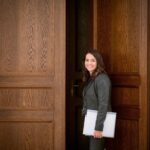 Novak to be Hungary’s first female head of state

Novak to be Hungary’s first female head of state

Hungarian Family Minister Katalin Novak accepted ruling Fidesz’s nomination for her to become president of Hungary on Tuesday. Novak, 44, tweeted “To represent Hungary, to serve the whole Hungarian nation – I am preparing for this challenging task with faith, spirit and heart. I respectfully accept the nomination as President of Hungary. I remain who I am.”

Peter Marki-Zay, who will stand as the united opposition prime ministerial candidate next year wrote “In the case of the position of head of state, the candidate is a constitutional requirement to be a person above the parties, expressing the unity of the nation, and respected. Katalin Novak, on the other hand, recently resigned as Vice-President of Fidesz”, he recalled.

Dominik Istrate of the Center for European Policy Analysis noted that Novak “will become the only EU head of state from CEE who is not directly elected through presidential elections. As she’ll be sworn in before the April parliamentary elections, this democratic deficit will allow Orban to block systemic reforms if the opposition wins.”

The second four-year term of incumbent President Janos Ader, also a Fidesz loyalist, will expire on May 10 next year. Hungarian heads of state are limited to serving two terms under the Constitution.