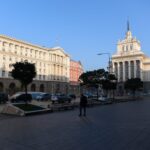 Dimitar Kovachevski is set to become North Macedonia’s next prime minister after the ruling SDSM party voted him as its new leader on Sunday. The 47-year old economist and deputy finance minister defeated two other contenders for the post.

Kovachevski will soon also replace his ally Zoran Zaev as premier, after the latter politician makes a final attempt to clear the way for North Macedonia opening accession talks with the European Union. This would entail solving the country’s long-standing dispute with Bulgaria, which has blocked North Macedonia’s bid to join the EU over a row regarding whether its national language is a variant of Bulgarian.

Once Zaev resigns in the coming few weeks, North Macedonia’s President Stevo Pendarovski is expected to provide Kovachevski with the mandate to form a new government.

Zaev will have been encouraged by news from Bulgaria on Friday that four political parties had reached an agreement to form a governing coalition led by the centrist, anti-corruption We Continue the Change (PP) party.

On Monday Bulgarian MPs are expected to vote through the coalition of PP and three left-wing and centre-right groups. Party co-leader Kiril Petkov will lead the new government with which Zaev hopes to cement his political legacy. Since becoming prime minister in 2017, Zaev has ended a “name dispute” with Greece by agreeing to append the word “North” to Macedonia to distinguish it from the Greek province of Macedonia in 2018. He also oversaw North Macedonia’s accession to NATO.