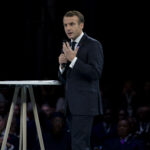 Eastern Europe will be high on the agenda during France’s six-month EU rotating presidency tenure which will commence in under three weeks, French President Emmanuel Macron underlined on Thursday.

Without specifically naming Poland and Hungary, Macron called the rule of law “non-negotiable” for the EU and urged countries to work towards European values. Respect for democratic checks and balances is an “existential struggle” for Europe, he underlined.

France’s stewardship of the EU Council will also feature “strong initiatives” for media freedom. “Editorial lines cannot be dictated by funding,” Macron said, “and we must act to better defend our journalists”. The EU must protect “democracy against all forms of manipulation”. Disinformation and cyber attacks are “a spectre used by the enemies of Europe and liberal democracy”, he said.

Macron said Europe must be able to control its borders, and expressed hopes that he will successfully reform the Schengen Zone free-movement regulations. Macron floated the idea of creating emergency task force to help EU member states with border issues to support this. He also referenced attempts by Belarusian President Alexander Lukashenka to encourage migrants to enter Europe via Poland, Lithuania and Latvia, stirring  tensions between the autocratic state and the EU.

“To prevent misuse of the right to asylum – which Europe invented and should honour– we must find a Europe that can protect its borders – and a political organisation that allows us to defend those values,” he said.

Macron, who has consistently rebuffed the attempts of Albania and North Macedonia to open EU accession talks, nevertheless vowed “to fight interference, manipulation by multiple regional forces that aim to destabilise Europe via the Balkans. We have a special responsibility towards the Western Balkans,” he said, adding that the EU “should lead a policy of re-engagement and investment, to support regional economic integration”.

France will take the reins of the EU rotating presidency from Slovenia on 1 January, with its term ending on 30 June. Macron, who has been French president since 2017, has not yet declared his candidacy for the general elections in the spring, but according to Elysee Palace insiders is likely to stand again.