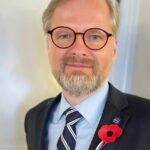 Share this article on:
Czech Republic Diplomacy News in brief

Czechia’s next prime minister to be named next Friday

Czechia’s next prime minister to be named next Friday

The swearing-in of the Czech Republic’s new prime minister looks to be a done deal, scheduled for Friday, 26 November. President of the Czech Republic, Milos Zeman, has invited Petr Fiala, who won the popular vote in Czechia’s October elections, for talks on putting together a new cabinet. Fiala picked up 71 parliamentary seats.

As the head of the Together coalition (Civic Democrats, Christian Democrats, TOP09) Fiala also announced his cabinet list, which must be approved by President Zeman. A new cabinet, including the 57-year-old university rector as prime minister, could take office by the end of next week.

Fiala is regarded as a fiscal and social conservative, and a strong supporter of the EU. He faces numerous crises, among them dealing with a budget deficit (which totals about EUR 20bn) and battling against the latest wave of the COVID-19 pandemic, which is hitting Czechia hard.